In the years following the Cross Canada ride, we'd talk about it with other people occasionally. Each of us had our own opinions of course, but we had an almost identical one sentence summary.

In many ways, it was our defining adventure. 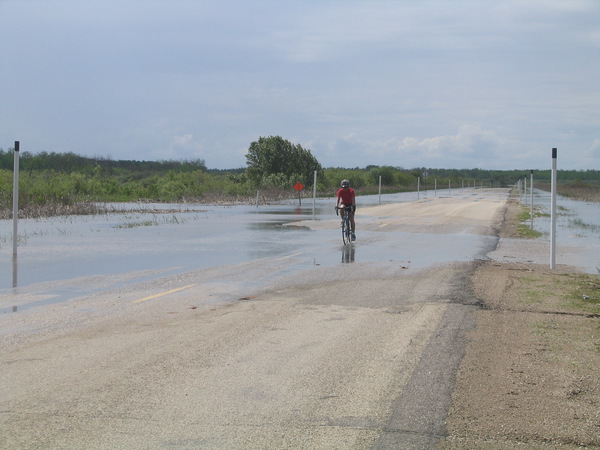 A shallow creek running across the road outside of Elma, Manitoba. This was one of several that day. Shortly after this we were chased by giant bugs that were really scary.

Hillary took a couple of years before she was really able to look back on it positively. Maybe that's not quite the right way to phrase it. Let's just say we didn't reflect on the journey often in the few years immediately afterwards.

But more recently, it did come up more regularly. Sometimes with me and sometimes I'd overhear her talking to someone about it. I think the general, simple summary was just that she was was proud of it. It was an accomplishment that, while it wasn't the most important one in her life, it was something different that not many people would do.

Part of this was also likely the kids starting to ask more questions about it as well. They knew we both rode our bikes, but Isaac in particular was beginning to learn about distances and grok just how far that really was.

I suspect we also discussed it more leading up to and going past the ten year anniversary of the trip, which was summer of 2017. We didn't mark it with anything elaborate, but on May 1st, 2017, we raised a glass to each other.

The ride did come at a physical cost. Hillary's knee was never the same again. While she eventually got it back to a point where she was comfortably running and riding again occasionally it would bother her.

Still though, it made me unreasonably happy to hear her talk about the ride with pride and positivity. I mean, in terms of total time, that trip was 1.5% of our relationship. We spent more absolute time in that truck than Hillary spent in hospital in her last year.

Had things been different it would eventually have been one of a few things we could point to as adventures. It would always be defining and important, but less so over time. But life went the way it did and that trip did become more important to both of us.