I'm 39 today. That's a milestone, but I'm not going to write about that specifically today. Not directly anyway. Birthday thoughts, good and bad will come another time I think. Also, I'm writing this a week in advance so I can post it before my birthday ride. I'll know better what I'm feeling on the day.

Rest assured, this week is complicated. 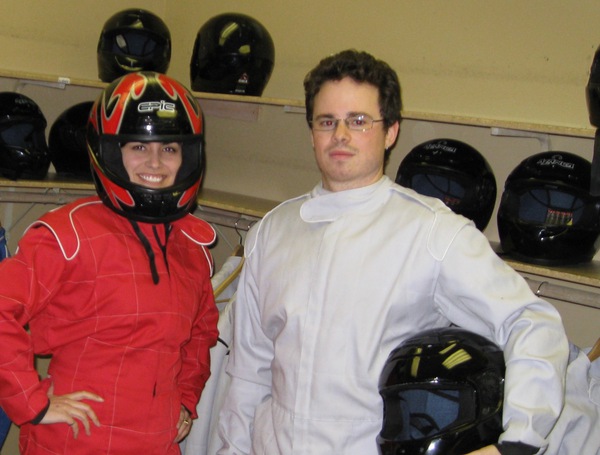 Just before some karting on my birthday in 2010. That was a good year. I may have mentioned that before.

Hillary was eleven months older than me.

This came up often. The ancient joke of "... age before beauty." A couple of our board games had rules that stated the oldest (or youngest) player was to go first. In unimportant debates, often I would end my side with some sort of, "...and I defer to the wisdom of age."

This entire topic was another running joke we had between us. Or, more appropriately I guess, a running joke that I thoroughly enjoyed and generally amused Hillary with. Or perhaps that was even too strong. She appreciated the amusement I got out of it? I don't know. Regardless, she laughed and never said it bothered her.

Sometime in the years after I first met them, I became aware that Stephan and Amy had a very similar age arrangement to Hillary and I. Birth years included. I also don't really know how much Amy appreciated the topic, but I know Stephan and I enjoyed it greatly.

Discussing pop culture or something, "I mean, can you imagine having been alive in the 70's? What would it have been like?"

My birthday however put us into a one month period where Hillary and I were the same age, at least in terms of numbers. Hillary would ramp up her side of this joke around this season. "Are you ready to be old soon?" "You'll understand all about that when you get older..." "Now you understand what I've known for so long."

I've entered that interregnum now for the last time. She is still ahead of me in terms of total days on Earth, but we're caught up in years now. One point Hillary.