A friend of mine mentioned this ride last year. 140km, 2200m of vertical gain, largely on gravel and mountain bike trails. Those numbers scared me in terms of difficulty. Hillary was also going through treatment and spring 2018 ended up being a pretty bad time for me.

But then Hillary died. I needed something to focus on, something to aim toward that was at least a few months out. Living day to day is mentally draining for someone who likes to daydream a lot.

So I talked to Graeme and started prepping for this event. We both signed up for the 'Epic' ride (about 15km shorter this year, but similar elevation profile), trained for it and on May 4th, rode it.

Scenes from the event.

The first gravel climb - descent - climb. Lots of portions of double digit grades uphill. Everyone slogging it out. Graeme and I were trying to keep our efforts mostly under control as we knew this ride was going to take us more than 8 hours. Hearing other folks panting and working super hard. Thinking, "That doesn't bode well for finishing."

The descent from that climb, rocky. Lots of large stones that were buried in the dirt. Every 50m or so we saw another person on the side of the road fixing a flat. Graeme ended up riding over a sharp rock which tore his tire a bit. Our first mechanical about 40 minutes into the day.

Turning left for the 'Epic' course while most everyone else around us turned right to head back to Cultus. The long painful slog up a paved false flat to Chilliwack Lake. This was one of my two pretty bad patches on the ride. This was nearly three hours and only 40km in. Seeing the leaders returning on the trails as we rode up. We didn't know it yet, but at that point, they were 2 hours ahead of us already.

Reaching Chilliwack Lake and realizing we were close to an hour ahead of the time cut and despite my serious concern, we would probably stay ahead of that limit.

Feeling pretty good for most of the next 40km down towards Cultus. That section was primarily on mountain bike trails and generally downhill. Far more poorly marked than the first half of the ride though. I definitely felt we were off course at times. We weren't. I don't think.

The wind and flats around the 100km mark as we were looking for that final aid station. Finally finding it at 105km just before the final climb.

The hike a bike up an unrideable trail. Immediately following that was a 6km long climb at about 4%. Not steep enough to really hurt, but we were going really slowly so the scenery didn't change much. Agony mentally and physically at that point.

We were the 5th and 6th last finishers. But we did finish. The long ride. It felt like an accomplishment or something.

That was objectively the most difficult ride I've ever done. I'm not totally sure it was the hardest ride, but it was certainly in the top 5. I thought about Hillary a fair bit on parts. Similar thoughts to things that I often had on bike rides.

"This is really beautiful, I'd love to take Hillary here."

"Hillary would have hated this kind of a ride."

"This part would be fine if I had her on a mountain bike with suspension."

They come unbidden mostly and probably will for years to come. I mean, I thought those things all the time while she was still alive and was frankly part of my inner dialog for years on rides. Other times I did take her to places I explored. Pitt Lake and the dykes of Pitt Meadows being a couple examples.

Okay. I don't really have a point. I'm done for now. 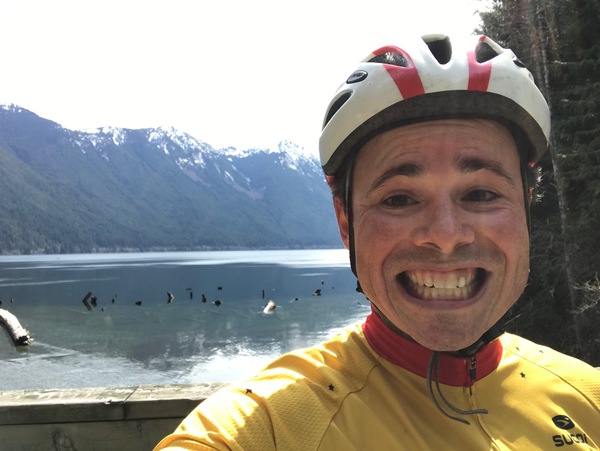 Chilliwack Lake, this is four hours in and we're not halfway yet. We're just about to start an extended section that we couldn't ride up. Then one we couldn't ride *down*. Good times.
moving forward
journal
bikes
Sekret: