The last day of school

Tomorrow will be Isaac's last day of Grade 1. You could make the solid argument that today is the last day as tomorrow he goes for an hour, but you know.

The official calendar marks tomorrow as the last day so I'm going to go with that.

Sometime before Isaac's first day of Kindergarten, Hillary bought a couple of chalkboards. Her idea was to fill them out on the first and last day of school each year and get pictures of the kids with them.

I yelled at Siri this morning to remind me to find the boards and some chalk this evening so I can have it ready to go. This will only be the fourth set of pictures with these boards, but it will be the first where Hillary isn't in one.

Then there are the smaller logistical concerns. I'd kind of like to make sure the actual picture is decent, which means using the main camera on my phone. Which I think means I have to have Paige take the picture. Or find a stand or something today and prop it up on the hood of the car or something.

I don't know. I'll figure it out I guess. I mean, I do have a stand that I bought when Hillary was making some videos. 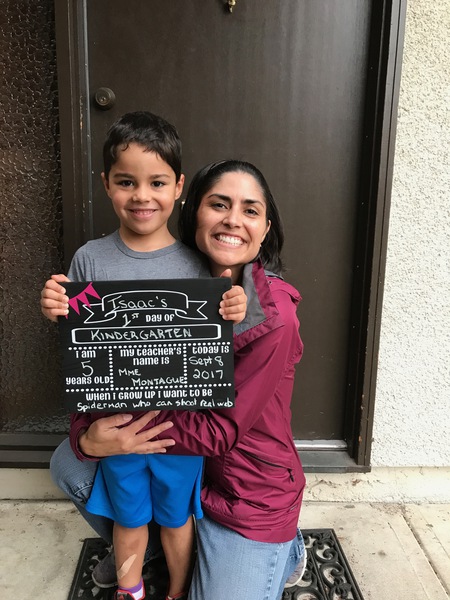 Day one of his school career. Sixteen hours or so after Hillary was diagnosed with metastatic cancer.

One of the things I did do over Hillary's last year was make a small list of items that were going to be important that I knew I would need to find. Things that Hillary would put away in a place that made sense to her and since she put them there, she would be able to find them months later.

These boards were one of those things that I noted. I knew if I didn't take note of where she put them I would end up needing to tear the house apart to find them. I do kinda wish Hillary had left a few notes of this form, but that wasn't really her concern by that point I suppose. Of course I would know where she put things.

I mean, this was Hillary, of course she would be there to find them.

Anyway, so I know where they are, but I don't know where I can find chalk right now. That's tonight's adventure. Worst case the kids and I haul off to Walmart or something before bed.