Ottawa has had a series of time trials that run every Thursday night from April to September. While many people take the series seriously, the attitude of everyone there was always low key, casual, and extremely encouraging to new racers.

The course is a flat 15km out and back on a relatively quiet road with a turnaround. You get on the bike and pedal as hard as you can for the distance and then stop.

This is where I first raced my road bike.

From our Clearview apartment the race course was about a 15km ride one way. A pretty nice warmup. On a warm summer evening, this was a gorgeous ride, mostly on separated bike paths. Hillary would accompany me more often than not.

We'd get 30km of riding together and I'd get a race in. 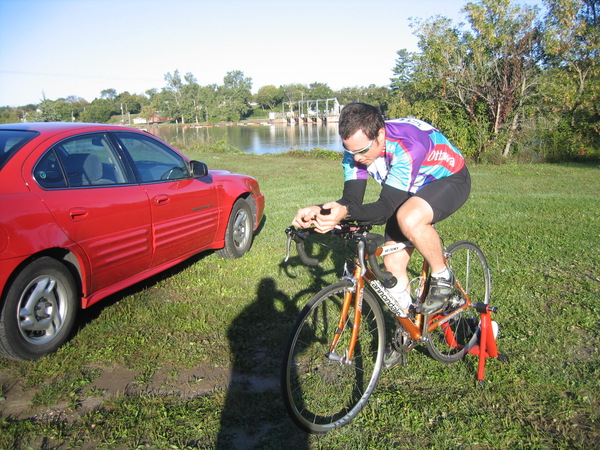 Warming up for a different time trial in the Ottawa area. But that's the bike setup for these things. Also, rare shot of the Grand Am!

A time trial, if done correctly, is pretty painful. Most nights after doing the race, my legs were utterly done. Left to my own devices, I'd slowly ride home, shower and relax for the evening.

Hillary, through our entire relationship, enjoyed being on the bike with me after I'd done a hard race or ride. It gave her great pleasure to raise the pace going up small rises and hills and drop me.

Thus, the rides home from the time trials were often... spirited.

I'd mostly just laugh and give a good natured, "You're killing me here," or something to that effect.

She would either just grin and show no mercy or play it somewhat innocent. "I didn't realize I'd sped up."

I don't remember the last time this happened. It was definitely when we were living in the Greater Vancouver area and the day after some random big ride that I had done. I think it was after kids, but I'm not sure by how much.

Anyway, just another part of our relationship and stuff.