You can never really plan for the future, all sorts of things can happen.

But you can dream about then then set things up to maximize the odds that your plans work out.

Hillary was the long term planner. I was the dreamer. I'd pitch all sorts of crazy stuff and she's prune most of them out as unreasonable. Though she liked how I thought so we'd play out those thought experiments and fantasize where they'd take us.

The Cross Canada trip was one of those.

But those dreams? Now? Mine are literally all gone.

I have no idea.

Those comfortable daydreams where I imagined us doing stuff when the kids were older. Or further, what we'd do when it was just us in the house again.

Or where would that home even be?

Loss of these dreams happened slowly over the year that Hillary had cancer. But it wasn't until she died that I had time to reflect and grieve. I began to internalize what this really meant. What it was to lose these dreams and have to deal with the implications for my future. 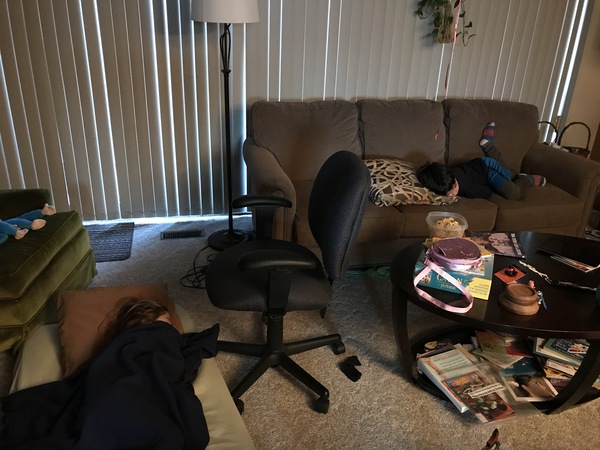 Shortly after we got home this afternoon. Evidently it was a good New Year's Eve party.

I have a few goals for this year. I hesitate to use the phrase resolution. Most of those goals revolve around the kids in various ways. That's probably not surprising.

One of those goals is to make a plan for something that is at least a year in the future and then try to make it happen. A plan for me.