I find the pictures comforting, I think. At least in part.

Possibly because it's proof that what we, Hillary and I together, had existed. It wasn't just me imagining things. That I'm feeling this immense pain for a reason.

This is the price of love and in most relationships, someone has to pay it eventually.

Sometimes it almost feels like the phase of my life with Hillary was a dream. Almost something that I made up. It couldn't have gone that well for so long and then ended so soon. 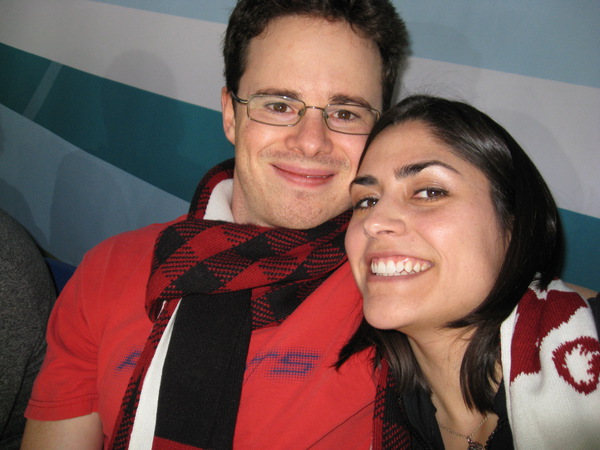 Selfie at one of the Olympic events. The conversation went, roughly, "Put on the scarf!" "I'm too warm!" "Put it on for the picture!"

Hearing other people say her name helps. It's emotional, but it's not like I've forgotten that Hillary is dead. It's a concrete reminder that people other than just me are missing her and know that she existed.

It's selfish, but I like hearing about us from other people. It's grounding. It's also validation and just empowering to hear that we projected some or most of what we felt internally.

Anyway, while most of the pictures and reminders are good, I occasionally need to browse through pictures from her last year. In particular the last few months when she had lost so much weight.

The last batch of selfies we took was a day or two after Hillary moved into the palliative ward. Those are particularly hard to look at.

These specific pictures are a reminder of, physically speaking, why I am where I am now. So much of our relationship was so good. Cancer is why I'm alone now. It wasn't anyone's choice.