Hillary did a lot of walking during the course of her cancer and this was by no means the last active thing she did. Though, to be clear, what was considered 'active' by this point was very different from what it had been a year before.

In early January 2018, Hillary, Paige and I went to Woodhaven Swamp. I'm not entirely sure of why it was the three of us. Perhaps Isaac was visiting my parents for the day. It doesn't matter now. The three of us went.

I have a vague memory of wanting to get out for a hike or something and Hillary being a bit reticent. At this point she was generally very rundown from the last couple of months of chemotherapy. February and March would be worse, but she didn't have any energy reserves to speak of. Making her dip into them would mean she was out of commission for the rest of the day at least.

I pushed gently and was successful. Woodhaven Swamp was a walk we'd done multiple times and she knew what it was like. There was some elevation changes, but ultimately it was about a kilometre through the rainforest. It was wet, so there would be creeks to wade and splash in.

Not just a rain walk then, this would be a rain hike. 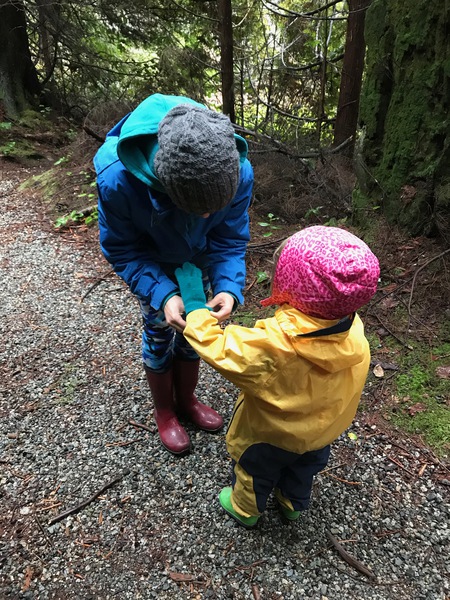 This is about three minutes after Paige loudly insisted that she did not want to wear mittens.

Paige loved outings with the three of us. She had both of us to herself, something which didn't happen terribly often.

The entire hike was about an hour and a quarter. Paige was done about halfway through it and wanted to go home. A couple of minutes later we came across a small creek and she was re-energized.

Hillary was tired, but smiling at the end of it.

Woodhaven Swamp is a special place. I won't hike there as much as the kids get bigger, it's short and probably not worth the drive for what could be a 15 minute power walk around the swamp.

But it was absolutely a special place for us when the kids were younger.