We almost always ate dinner together as a family.

I do not remember know who brought it up originally but I do remember talking about it with Hillary. It would be a forced time to sit down with the kids and talk and just be together.

I know I wanted it. Hillary did as well, so it wasn't a long debate.

We would start early with the kids and the idea was that they would not remember any other way of doing it.

It's probably not a surprise, but we ate dinner together all the time before kids. Early in our relationship, phones sucked, so that wasn't an issue. Later, we had a nearly unspoken agreement that the phones were put down on a counter away from the table while we ate. We would go through phases where we'd be binge watching a show together and eat in front of the TV. 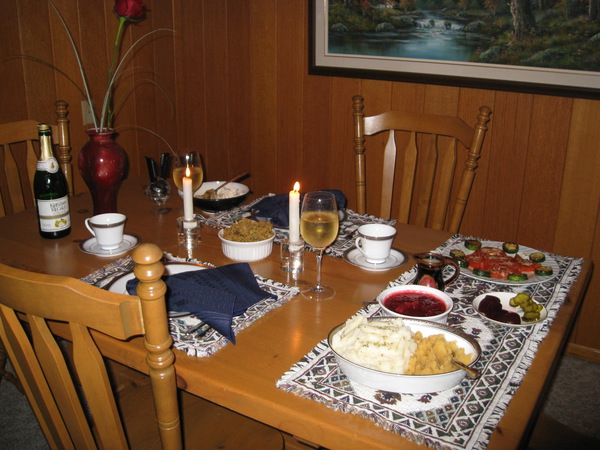 More elaborate than most. Our Thanksgiving dinner in 2011, as with most of the holidays in 2011, we knew this was likely going to be the last one with just the two of us.

So that's what we did. As an infant, Isaac often joined us. Once he had his own seat at the table, we almost always ate together. We would do this again with Paige. This included a few month phase with Isaac where he'd fall asleep on the bench somewhat regularly.

Hillary and I, on all but our worst nights, would wait out the slowest eating kid and once we were all done, clear the table and get second course ready.

Dinners are incredibly hard now. Hillary and I had them together almost every night for fourteen years. Especially after kids, this became a daily window of time where we usually didn't talk about the job of raising kids but just talked about stuff.

One of my jobs at the dinner table was always to give a rough rundown of the next day as Isaac doesn't like surprises.

I had to change where I sit at the kitchen table.

The three of us still eat together most nights. Evening activities make it a bit more chaotic on a few evenings, but we generally actually get our butts into seats at the same time for a few minutes at least.

I'm still doing this with the kids as my initial reasoning hasn't changed.

I still give the next day's itinerary to the kids as we eat.

I usually start cleaning up before everyone is done now though. I finish my dinner and wait a polite few minutes. Then if the kids are still slowly chewing, I'll excuse myself, get up and start cleaning up.

The phone is still put away.

I miss talking to Hillary.