Isaac was doing cartwheels by the time he was three and a half. Probably earlier than that, but I know for a fact it was happening then, so I am being somewhat conservative here.

Both Hillary and I did gymnastics when we were young. Hillary a bit older than I, I think. Her parents were gymnasts through high school. Hillary had a cousin who I believe is currently a national level judge. (Or very close to getting that accreditation.)

Long story short, this was a sport that was on our radar.

Isaac was an outgoing, excitable pre-schooler so we figured it was a no brainer to get him into the Active Start program run by the local Wings Gymnastics Club. At this time, he'd join into an activity with new people at the drop of a hat.

Hillary took him as it was his first activity and she was excited. It was September of 2015 and it would give me an hour of time to hang out with Paige.

"Isaac refused to go and join in and we sat and watched the whole time."

This happened again the next week. And the week after that. After the third time, Hillary was done and willing to wait a year. Her opinion was that there was no point in continuing to have him not participate when we knew there was a waiting list. 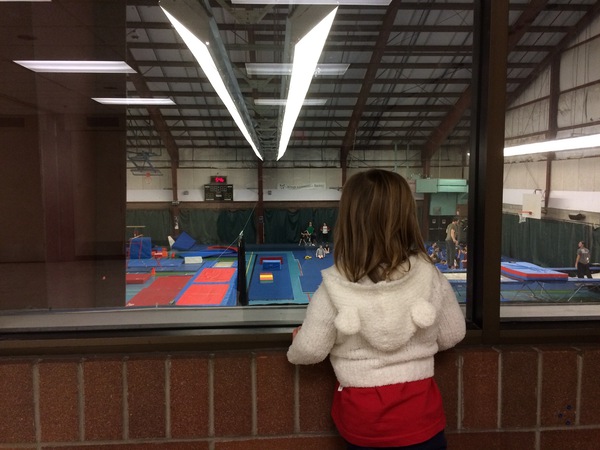 I volunteered to try the next week. I'm sure that conversation involved a challenge from Hillary of some form. I didn't really get a run down from Hillary as to what her tactics had been so I winged it. I walked out with Isaac and we sat down and watched the 15 minute or so warm up. He didn't go with the group, but I did gently talk him into trying some of the stretches.

Then the big group broke into their smaller groups to do the various stations. The first for Isaac that night was the balance beams. He wanted nothing to do with it. I talked him into trying once with me holding his hand instead of the coach.

We did one round, to the end of one beam, crossing to the next and returning, then back on the higher beam for the final pass. Isaac barely needed to touch me, save on the higher one. So the next time around, he went alone and I stood there. When he got to the higher beam, he let Jake, his coach for this year, spot him.

I watched from the sidelines for the remainder of the class. He never had an issue again.

When we got home, Hillary was impressed that he had done almost everything that night. Isaac was three and a half. He was over the "All Mommy, all the time" phase, but this was the first time that I remember consciously feeling like maybe I knew my kid and how to handle him as a little person.

By the time Paige's first gymnastics day came around, there wasn't a question. I would be the one taking her.

These weren't major events. But for me, I feel as though they were important small victories. Things that were, not defining, but indicative of a theme. Something that built confidence that I might be at least competent at this.