I was planning on taking Isaac cross country skiing last winter. I don't remember precisely when but I knew I wasn't in a hurry. But we were busy. Hillary officially got word that the first line chemotherapy wasn't working in January. In early February, Hillary ended up in hospital for several days with an unknown infection.

Sometime in the week or three after that, I'd planned out a weekend day for Isaac and I to head up to Cypress. The night before, I checked out the mountain reports and saw that the groomer had broken down and that there would be no classic tracks set into any of the trails.

So I delayed that weekend. I don't remember how long it was down for, but I do remember having a backup date that was also affected by this same issue.

Shortly after that, Hillary went into what was the period of lowest energy and most pain throughout the whole cancer save for her last few weeks. So I was busy just keeping things going around home for several weeks as the chemo damage slowly faded.

Isaac and I didn't get out last year. He kept asking and I just said, "I don't know when we can go." 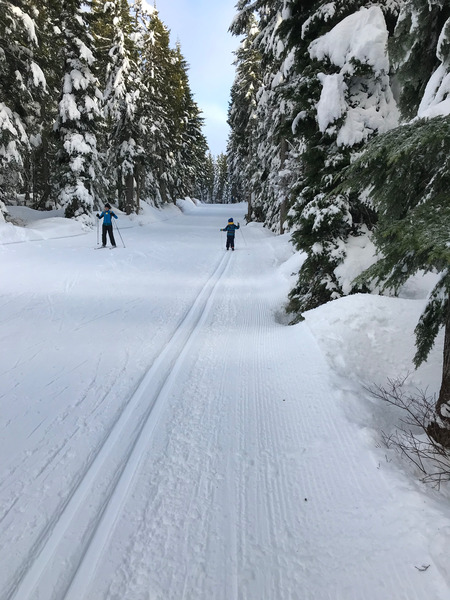 Isaac headed up the trail.

We slid around on the flat area by the parking lot a bit to get him vaguely familiar with how you moved forward in the tracks. He quickly decided that was boring and we really should go into the forest.

We'd see skate skiers go past us. Isaac noted that they were faster than us and it was easier to do that. I disagreed. When we eventually hit a steep hill that he had to try to skate up, he agreed that maybe I was right and it was easier the way we were doing it.

The first big downhill, he wanted to go in the middle of the trail because that's how the people who found it easy were doing it. The second downhill, he stayed in the grooves, went faster and didn't fall down.

We ended up out for nearly two hours. We had lots of stops as Isaac kept wanting to chat about what we were doing. Isaac asked if Hillary was a better skier than I. He asked if she would have had fun today like we were. That was a yes to both.

It was a good day. I wish it could have been Hillary and I with Isaac for a special day with the three of us. This is going to be the way of things now I guess. 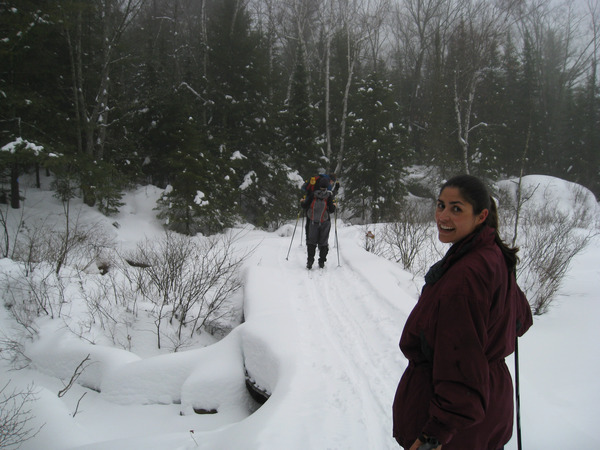 From our yurting and skiing trip with Sara and John in 2008 at Silent Lake Provincial Park. I'll talk about this sometime. I look forward to a similar trip with Isaac and Paige one day.
moving forward
sports
Sekret: