I would say I cooked the majority of the time. Not a heavy majority, but definitely more than 50%. At various points after Hillary was diagnosed, I was doing nearly 100% of the cooking and general food work for myself and the kids. Hillary mostly handled her own breakfasts and lunches.

Cooking is a Warren job and one that I can do competently.

Meal planning, however, was a Hillary job. She meal planned for years and wrote the grocery list. Hillary's last meal plan for us was written three days before she went into the hospital for the last time and three weeks before she died.

For nearly two months after she died, I felt paralyzed with the prospect of doing a from scratch meal plan. I still can't touch the weekly meal plan shared list that we used for multiple years. I've created my own.

I knew this was going to be an issue within the first couple of days and so I asked a few friends and family members to start sending me their meal plans. No recipes, no directions, just literally the dinners they were doing for a given week. I figured I could pick and choose from those several lists and compile something.

My emphasis to everyone was to make it as low work as possible. I didn't want a meal plan for us, I wanted that insight into the lives of other families.

It's been great. Thank you everyone that has sent those. It got me through to the end of 2018. I am mostly handling it now. It's my wildly entertaining Saturday morning task. 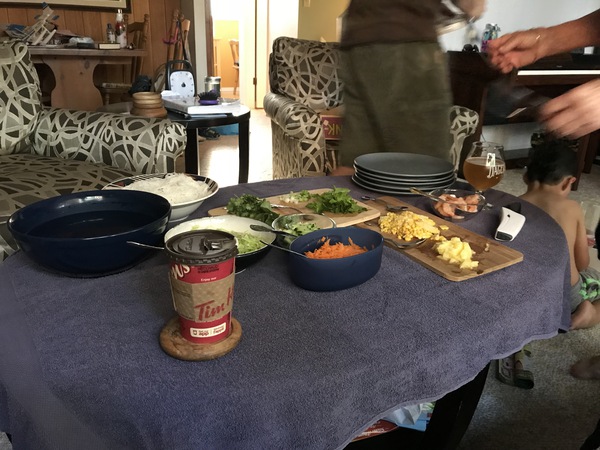 Early September 2018, salad roll living room picnic. Salad rolls are sorta like tacos. Hillary had spent the day before in hospital so the meal plan including one of her favourite new meals once she was home again was fortuitous. Or something.

In November sometime, the kids and I were eating hot dogs, corn on the cob and edamame. And I didn't feel like a failure. It was the only thing on the weekly meal plan that seemed like an easy cheat day. But a similar dinner had shown up on two meal plans that I'd recieved from other people. People who I knew had at least as high or higher standards for meals than I did.

It provided a validation that not every night had to be perfect. As long as what I was making was largely healthy and balanced, it would be okay.

These were all things that I knew and did before. But I lack that constant validation and support from Hillary that I could always rely on.

Thank you again to all of you.