In large sweeps, Hillary and I picked Paige's name in a similar manner to how we picked Isaac's name. We actually had a minor headstart as Hillary was briefly pregnant a few months before she eventually carried Paige. That pregnancy ended in a miscarriage.

This time around, as soon as the ultrasound tech was comfortable making a call, we learned the gender of the baby Hillary was carrying. We had done it once without knowing and figured we might as well try out the other approach.

So we knew from relatively early that we were primarily looking for a girl's name. The middle name was fairly easy to choose and that was locked down almost immediately. Her first name, however, took longer.

Our first choice girl's name that we obviously didn't use on Isaac no longer felt appropriate for us. We went through the same routine during our drives from place to place, listing artist names, scientists, authors, friends. Our short list was disturbingly long and none of them really spoke to us.

At some point I was thinking back among people I knew. Just to widen the ocean of names I could recall. I remembered an acquaintance from high school who was in advanced math courses with me and was also a well respected athlete. I pitched that name. "How about Paige?"

Turns out, I didn't go to school with anyone named Paige. I realized this a year or two into Paige's life when a random memory about that math class popped into my head. When I mentioned this to Hillary, she found it pretty funny. It didn't really change anything. I hadn't invented the person, but had utterly misremembered the name.

To this day, I don't know where I got Paige.

Another time, I was going through the various nature names that could work. "Okay, don't just give me a hard no on this one, roll it around a bit, especially with the full three names. What about River?"

A couple of days later, Hillary let me know that we had really narrowed it down to two candidates. We would keep trying, but either of those could work. Paige and River.

I was happy with either, but slightly in favour of River. Hillary was mostly happy with either but more in favour of Paige. We never really reflected back at this so I wonder now if the 'debate' only went on as long as it did because Hillary felt she was humouring me or if she really was nearly okay with River.

So the day came. Our baby girl was born. We had to fill out the various paperwork required for a birth certificate and other things. "Well, we don't need to do this today, we can decide and fill it out tomorrow." 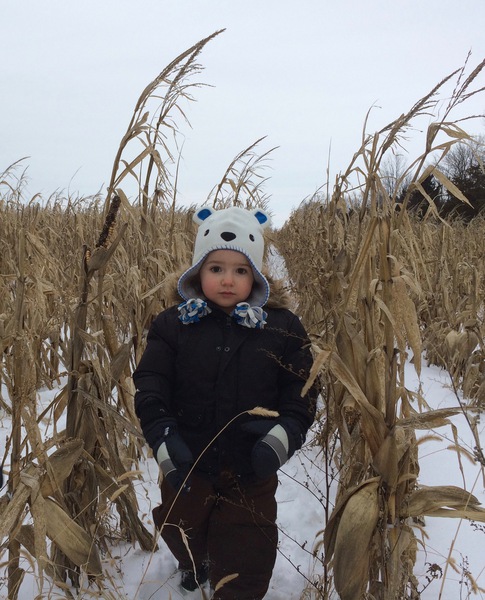 Paige, near the beginning of the time that she really looked like Paige. This was from our last (to date) winter Ontario trip in 2016. Paige was nearly two and a half.

I don't remember ever calling Paige by either name for that first week as we debated back and forth. The debate was never heated. A week after her birth, we had decided that one way or the other, we would settle it that day. Hillary ultimately made the call, "I do like both names. But Paige is more traditional and I don't think I could be at a playground and yell out 'River!' I guess I'm still kind of old fashioned."