Hillary was on a break from the immunotherapy. Some side effects which were fairly concerning even if they weren't causing much in the way of day to day pain. We kept hoping that she would be able to start again next week but it didn't seem to really happen. Finally, in very late July or early August, it became clear it was going to be at least another couple of weeks.

The appointment was probably on Tuesday, August 7th. That afternoon we discussed the delay and Hillary said she wanted to go to Ontario and that we might as well go right now.

I think we bought the tickets on Wednesday and we flew out that Saturday. It was by far our fastest turn around time on a major plan with the possible exception of the whole wedding venue thing.

I was somewhat reticent. I mean, I wasn't going to say no to this. I knew that going back to Ontario was high on her priority list and the main reason we hadn't planned a trip yet was due to treatment schedules. It had also been at least 18 months since we'd been back in Ontario, one of the longest stretches since we moved to BC.

But the Vancouver summer isn't overly long and with this, we would be out of town for three of the eight or nine weekends during Isaac's summer break.

I had planned on taking Isaac camping at Whistler that weekend. It was his turn for an Isaac/Daddy solo trip. He was disappointed, then promptly forgot completely about it when he learned where we were going instead.

I was grumpy about this. I allowed myself some amount of whining, but we immediately trucked forward into planning. The negotiations were short. I demanded two concessions. One, I would bring a bike and two, we would spend at least a couple of nights at the cottage.

I suspect Hillary knew I'd bring up the former and had already considered it. I also suspect she was a bit surprised that I made the cottage trip a hard requirement. Hillary wasn't going to need to be convinced about that though. We also made sure that there were a couple of bikes the kids could use while we were out there.

We were busy. We did a ton of things and saw lots of people.

It was exactly the trip we needed. 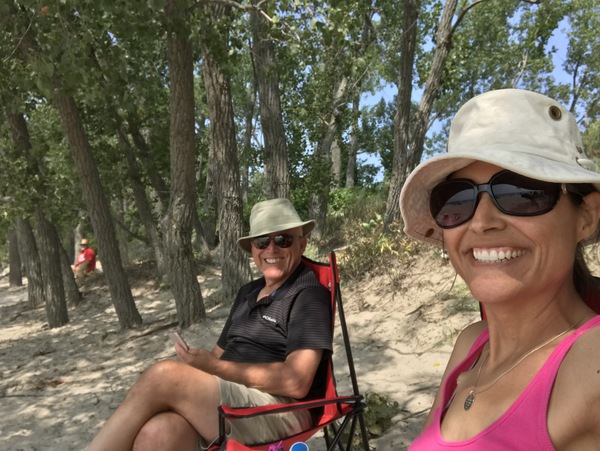 One of the many things we did, a picnic at the Sandbanks Provincial Park. This one was my suggestion. Happy with that one I am.

At some point during that trip, we were talking. Sitting on the couch in the living room at the farm. Loosely I wanted to make sure she didn't have anything she needed to do or would regret not doing in these two weeks. I was being circumspect as I usually was when the topic edged closer to likely disease trajectories.

I remember her reaction when she realized what I was actually asking, "This is not my farewell tour."

Virtually all of her goodbyes to folks on that trip were final. The last time most of these people saw her. The last time some of them spoke to her. These partings were on Hillary's terms. Generally she was feeling good. Those goodbyes were after good visits in familiar and loved places. Often they were a, "See you later," or, "Talk to you soon."

It was exactly how she wanted it.