Mother's Day is another milestone. Most of the holidays are, really. Any of these first times a special day happens without Hillary.

This one is complicated as it's another day that celebrates Hillary, one aspect of her life in particular. It kind of snuck up on me this year, mostly due to the fact that late April was busy with the events in Ontario around her birthday. I was still recovering from that emotionally when I realized that this week was Mother's Day.

So what are we going to do today? That's a great question. I think this year, as with most of the other first time holidays, a new tradition isn't really going to be set. We'll get through the day.

Well, I'll get through the day, the kids aren't really as worked up about any of this as I am.

I think we'll work on the house today. We'll do small chores, tidy things up and start to get the backyard setup. It's a thing that Hillary would have appreciated.

We didn't really have a Mother's Day tradition here yet. I would make a breakfast, likely one that was up there on her favourite list. I'm pretty sure I remember making a breakfast skillet a couple of times. I'd personally try to take the kids out of the house for a couple of hours, just for quiet time, then we'd do something in the afternoon.

Generally an activity that Hillary enjoyed but the kids would appreciate as well. I liked to also treat it as a day, much like a birthday, where she got to pick the dinner. I think that mostly happened.

Not that I'll make a bigger deal of it next year, but I think I'll spend more time trying to figure out what we should do on this day. 2019 is a rebuilding year and I'm still not really planning ahead overly much to say the least.

I dunno. This was disjoint and random.

Happy Mother's Day to you mothers out there.

Happy Mother's Day Hillary, you did a fantastic job. 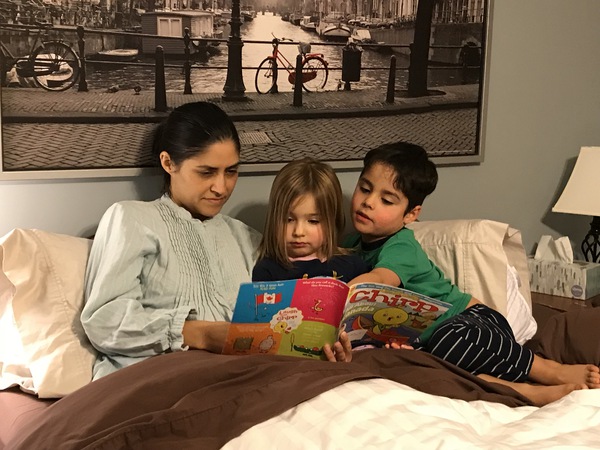 Reading to the kids before bed, December 2017. This is well past both of the kid's bedtimes. I don't know if I've mentioned the marshmallow thing before. I should at some point.
moving forward
holidays
mothers day
journal
Sekret: