When talking about the rain, I mentioned some of the other things that I could hear and Hillary largely couldn't.

At this time of year, one of those things is a constant around here.

Early in our relationship, Hillary told me that one of the things she missed most was hearing the chirping and singing of birds. She remembered it from her childhood, but since then she had been unable to hear any of the various wild birds that made higher pitched noises. 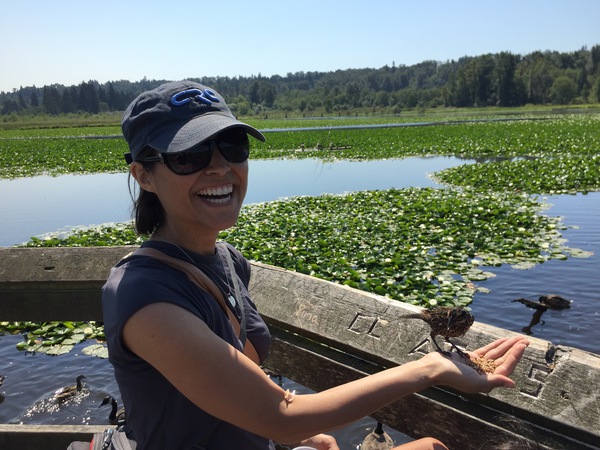 From Hillary's last trip to Piper Spit in Burnaby Lake Park in July 2018.

So it was one of the things that I would point out to her. If we were out and there were particularly peaceful or distant quiet peeps, I would tell her. I would try to describe it in as much detail as I could to paint a word picture.

A word picture of a sound. A word song perhaps?

Some particular memories of this.

Carina Place had a number of trees around it. This, when we moved in, included a large tree that had branches right outside of our bedroom window. Chickadees would nest in that tree. So every spring as the hatchlings broke out of their shells and started to make that extremely high pitched peeping, I would tell Hillary about it.

Hillary would get excited and since these were sounds that were well beyond her range would listen while I described it. This almost always happened in bed in the morning before we got up. It's closely tied in my memory with cuddling in bed, not quite ready to face the day.

The last time I remember doing this was at the palliative ward at Burnaby Hospital. We were out in the little courtyard and some late season birds were in the nearby trees and nattering away at each other. We were talking about other things and there was a pause in the conversation.

Occasionally Hillary would ask me if she was hearing birds. Usually it was when there were a number of slightly larger birds getting particularly chatty in the summer. This was the situation where it would touch on the edge of what she could hear.

Whenever I confirmed that was what was actually going on and started describing it, Hillary would go quiet and still. She would close her eyes with a smile on her face and just listen. How much she could hear and how much was reliving those early memories that were sparked by this I don't know. It doesn't matter.

She was at peace in those moments.