Carina Place is a three story townhouse. The master bedroom and kitchen side of the house face west-southwest. That means the afternoon and evening sun beat down on that side of the house. We are also an end unit, so two thirds of the house get lots of direct light heating things up.

As you might expect, the upper floors get ludicrously hot on these sorts of days. At least a degree or two warmer than outside due to the sun and insulation. I've never really measured.

Hot air rises and the ground itself is cooler, for at least a while.

All this to say, we're camping out in the basement tonight.

I have fairly vivid memories of lying in bed, upstairs, awake, and sweating, in hot parts of the summer. I also remember sleeping in the basement quite a bit.

The pull out couch wasn't terribly comfortable to sleep on and Hillary vastly preferred our mattress. It had to be a serious heat wave that we were a few days into before she'd relent.

By and large, fans worked well enough for her. As long as they didn't oscillate that is. Obviously noise didn't bother Hillary, but a breeze that turned on and off every several seconds? This was infuriating. I recall many evenings carefully positioning the fan so that it would blow across both of us without it needing to rotate.

But eventually she would agree that perhaps we should sleep downstairs. A couple of times it was after I announced that I was done sweating and was moving downstairs. Perhaps she just needed me to make the first move. A couple of times I went first, made the bed and twenty minutes later a sheepish Hillary snuggled in.

Well, snuggle might be the wrong word. Splayed spread eagle naked with maybe our fingers barely touching as more body heat was not what anyone needed.

I'm pretty sure we ended up down there for at least a few nights every single summer. I definitely remember sleeping in the basement with Hillary when she was very pregnant with Paige during a June hot stretch. The kids loved the adventure of being down there and were proponents of it every time it came up. 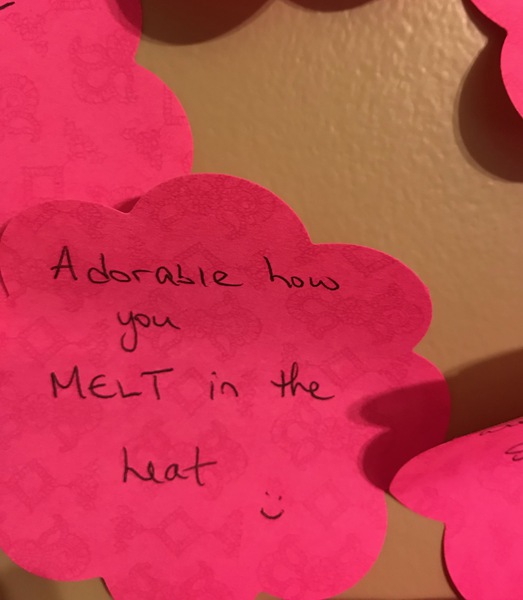