The pull out couch

Once upon a time, there was a pull out couch. It was floral print, weighed roughly the same as a tank and belonged to Hillary's grandmother. The couch was slept upon, sat upon and was a fixture in the house. Eventually, it was time for that couch to leave the that house and find a new home.

Hillary got the couch. 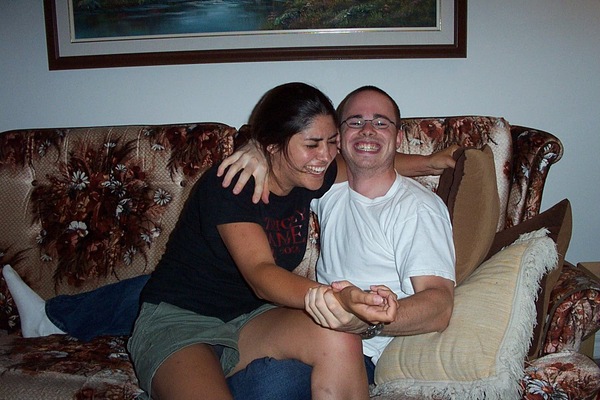 My earliest known picture of the couch. This was in Hillary's Parkdale apartment and was almost certainly sometime in the summer of 2004. This picture doesn't show the bad sunburn I had at the time. Hillary was unaware of this. We re-discovered these pictures years later and I mentioned how much pain I had been in. Hillary was mortified.

I know Hillary moved into her Parkdale apartment in the winter of 2003. I recall it being warm when I was introduced to the couch, so it must have come months after this. I, and thus the couch, were not involved in the initial move in.

The two or three of us who had come by to help out started working. We got the couch into the lobby and attempted to get it into the elevator.

You'll note I used the word 'attempted' there.

This couch, which was not huge, would nonetheless not fit. We would have to take it up the stairs.

Hillary's apartment was on the fourth floor. It was an older building, so the stairs were not particularly spacious. I don't remember how long it took. I remember being sore the next day. I don't actually remember much of Hillary at this point. I'd probably only met her a half dozen times.

We would lift and struggle and get the couch up half a flight of stairs, then have to tip it up and wrangle it around the corner. We'd go up another half flight to the landing onto the floor. That had a bit more room to work if I recall correctly. Then we did it again. And again.

I'd move that couch three or four more times depending on what you'd count as a full 'move'. It was a royal pain every single time. We would bash it into walls and chip paint almost every time. It would nearly claim fingers.

Roger would sleep on it for a couple of years. So would countless guests and friends over the twelve or so years it was in our lives. Hillary and I would watch hundreds of hours of shows and movies. I'd play through dozens of video games on it.

Our first kiss happened on this couch.

We would re-stuff the cushions when we decided they had been irrevocably squished. The holes where the screwed in legs went were stripped and gouged wider. Any movement of the couch would pop out one or more of the legs.

Eventually, in mid 2016, Hillary decided it had been around for long enough. She was done with having a floral print couch and it was prohibitively expensive to get it re-upholstered. I have mentioned before that by the summer of 2017 we had a list of things we wanted to do around the house. Replacing this couch was the first thing on that list and we addressed it together. 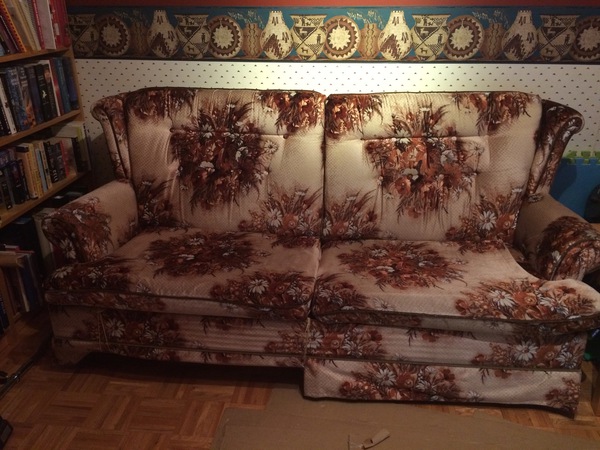 The last picture of the couch while it was still inside before it left our life. The cardboard you see is the packaging from the new couch we had bought and put together. Huzzah Ikea.

I'm really glad we did address that one together. I'm not sentimental about a ton of things, but I think I'd have struggled with this couch for years before I could decide to pass it along.