The first time I took Hillary to the beach was during the October 2004 trip. Likely on one of the first days we were out there. Possibly the evening we arrived. This isn't about that time. Nor is about the several times we went there during windstorms or on particularly nice evenings or for dates at the restaurants down there.

We went to many beaches, but largely when I talk about The Beach I mean the one that I grew up 4 blocks away from. The White Rock beach. I can't tell you now how much time I actually spent at the beach growing up. I certainly have many memories of being there. Running through tidal pools, swimming in the ocean, jumping off the pier, catching crabs, looking for sea life. 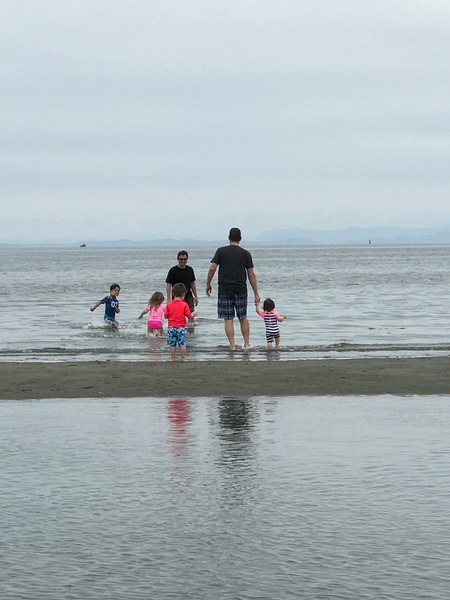 A day at the beach in 2017. As I was always the one getting wet and salty with the kids, Hillary always had the camera and took this one.

I don't remember when the first time I took Hillary down there at low tide on a hot summer day was. I remember being there that first time though.

Her wrinkled, vaguely disgusted expression as we walked across wet seaweed laying on the sand. Beyond that, going out of her way to find a path through the seaweed in the deeper tidal pools to avoid having to step through it onto unknown footing.

"Oh wow, this water is warm," as she stepped into the first shallow tidal pool which had been baking in the sun for hours.

"It kind of stinks a bit, doesn't it?" There is a fair bit of sea life at the beach and anything dead does tend to, well, not go out with the tide. This was evidently a new experience for Hillary. I think if you asked Hillary what the worst thing about the beach was, this would have been it. The shells were fun to find and look at, but the numerous crabs that had been picked over by seagulls did not make her happy.

I remember getting out to the actual ocean, as that was always the ultimate destination of a walk over the sand. I tried to convince her to actually swim, but that was a non starter. The water out there wasn't overly warm and as I've mentioned before, swimming never a top priority. That said, she did wade into deeper water with me for a bit.

I remember standing at the verge, waves lapping over our feet. Hillary commenting on the regularity of the waves and how they were spaced out further than what she was used to at the lake.

She humoured me sometimes and went down to the beach with me. Later, once we lived in Burnaby and we were taking the kids down to White Rock regularly, it became more of a thing I did with the kids. Hillary would have a couple of hours kid free at my parent's place while we did beach things. During these trips, I would take pictures of the kids to share with her later.

Part of this was me selling the ocean to her. A clause of the West Coast Deal and a general requirement Hillary had with living anywhere was that we would be near water. Waterfront was not required, but we had to be able to get to a body of water without too much travel. While it wasn't the lake, and she reminded me of that from time to time, I think the ocean sufficed.