So a few months ago, maybe several months actually, the dishwasher stopped working particularly well. For a while it'd been not cleaning super great, with soap streaks left on the dishes.

Finally though, it was no longer draining. At this point I debated getting someone out to repair it or whether I could do dishes for a while and then just get a new one when I eventually got around to renovating the kitchen.

Then COVID happened. Getting someone in to repair it became a non-starter and so I did dishes by hand for a couple of months. By the time it was okay to have people back in, it was a routine. As of a couple of weeks ago though, I decided it was time to get a working dishwasher again.

I watched youtube videos. I figured out likely parts that might be failing and ordered one. It came and yesterday I pulled the thing apart, replaced it and tested a couple of other parts that were other possible problems. I put it back together, ran a rinse cycle and the kitchen didn't flood.

Then I ran another and a load of dishes in the evening and the kitchen still refused to flood and the dishes came out clean. Great Victory. 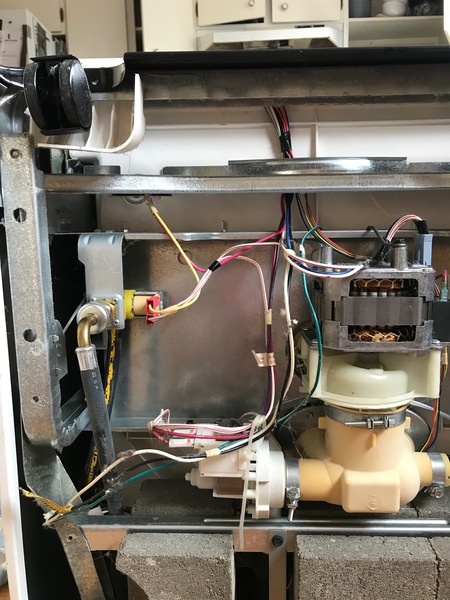 Okay. So this is what it looks like before I take it apart...

For the first time in several months I felt, while I was doing a task, how we would have handled this. With her upbringing on the farm and engineering background, often repair tasks would fall to Hillary. Or, more precisely, it would fall to us with her taking the lead with regards to tactics and plans.

So many regular tasks have now been done by me for at least two years if not more that for many of them, I no longer really have that sense of, "This is how Hillary and I would have done this." I just know how I would do it.

Those moments will only grow further apart. I'm two years older than she was now. Three years apart from when our trajectories changed dramatically. I can't envision how she would have grown in wisdom and knowledge in the meantime. How our relationship and dynamics would have changed. She's always going to be in her late 30's in my memories while I get older and continue to change.