The usual warning, quotes found here are paraphrased, but they are pretty close to what was actually said at the time.

The first Christmas Hillary and I spent together was 2006 with my parents in Vancouver. For the remainder of our relationship and marriage, we would spend Christmas on the west coast one year and Ontario the next. There was a single exception, 2011, the year Hillary was pregnant with Isaac. We decided it would be more prudent to not travel. That was the right call.

In 2012, we were back in Ontario for Christmas and continued the pattern.

Our last Christmas in Ontario was in 2016 where we spent several days at the farm and then did the actual Christmas festivities in Toronto. It was fantastic.

Sometime in the next few months, however, we decided that we needed to start building our own traditions. The kids were getting older and we wanted to make Christmas a thing that we did in our home.

Hillary was diagnosed in the early fall of 2017. It was going to be a west coast Christmas regardless of other plans and we forged ahead with what we imagined to be a typical one. We had Christmas at home and it was a good. Hillary was somewhat run down from the chemotherapy, but I know she dug deep that day to stay active and engaged. 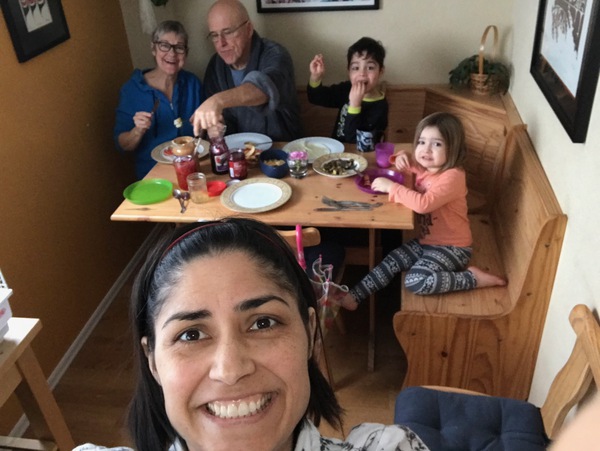 More than once that day she said something to the effect of, "This isn't going to be my last Christmas."

After the morning chaos and breakfast was done, I could see her exhaustion already. We had a quiet moment together. I don't remember what I said or did, but I remember her reaction. "I have to do today like this. I want it to be normal, and I know this might be the last time I'm here for one. I want to experience it."

It was her last Christmas. It was delightfully normal. It was what she wanted I think.

This year could have been an Ontario year, but the decision we had made before the cancer was that 2018 would be the first year of a new pattern and building our own traditions. I don't know if this was the right decision. It's what I did though.

I don't think I am building any new traditions this year though. I'm going through the motions to make it feel vaguely normal for the kids. I don't even know if that is a good idea. Two and a half months out from her death isn't anywhere near enough distance to be able to stray from what I know how to do.

Twelve years ago this morning I asked Hillary to marry me. The first Christmas morning we spent together.