Over the year between Hillary's diagnosis and death, I talked to a number of different people about it. Prognosis was a word that came up often. I generally did not mince words here. If they were asking me, I was going to let them know about my reality.

A question that often followed that up was something to the effect of, "Is there anything Hillary wants to do?"

The hilarious response was always, "Live."

This wasn't, of course, what anyone wanted to know when they asked this. The question most of them were really asking was, "Is there anything on Hillary's bucket list?"

There were. I'll write about those another time.

But there weren't many. 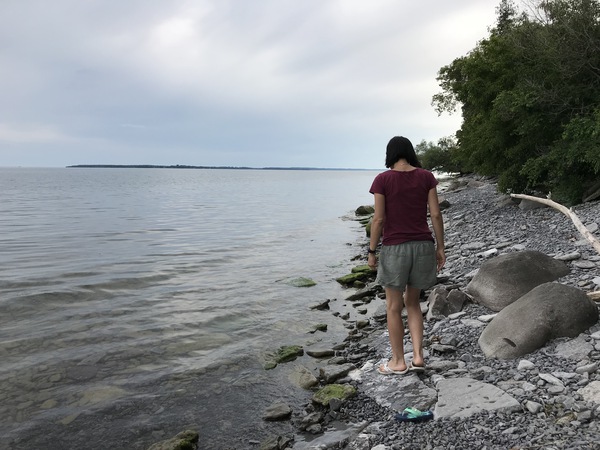 A normal day at the lake. Getting back to Ontario last summer was one of those few things that were on Hillary's list, even if she didn't articulate it that way. Three of us swam, she watched. She and Isaac skipped rocks and she talked about how Grandad would do that with her.

Once we had an idea of how serious this particular disease was, I brought up the bucket list topic. The healthiest part of her life remaining might be right now and if there was anything she really wanted to do, now was the time.

The outcome of these few discussions we had was similar each time.

Hillary wanted this time to be as normal as possible.

Much of Hillary's life wasn't normal. From a medical standpoint, she had colitis and was hard of hearing. Faced with this diagnosis which would lead to difficult treatments and possibly major surgeries, I think she wanted to take control as much as she could. She had made everything up until this point just work. Why would she not treat the cancer in the same way?

Maybe this was for me, to make our time together easier.

Maybe this was what she felt would maximize her chances of beating this cancer.

Maybe she didn't want to make a huge show of the disease with grand gestures around the kids.

Maybe she knew that if she was going to focus on being mindful and in the moment, she could not come up with a list of things she almost certainly wouldn't be able to fully complete.

As I reflect, I think there may have just been a simpler factor as well. We both enjoyed our time at home. With each other and the kids, moving through life. Talking and laughing together. We each loved the person we were lucky enough to spend our lives with.

I don't know if I did the right thing by supporting this. Should I have pushed her harder to explore some of those larger experiences I know she wanted to do? It's hard to say. It's too late now though.

If she regretted this path, she never told me. By the time we knew we were approaching the end, it was too late to bring her home again, let alone go on a trip somewhere. But she lived her life up until that point.