Hillary loved pad thai. So at some point in our first couple of months of dating I figured I might as well try to make it. I know it was in her Parkdale apartment and I'm pretty sure it was cold out. Let's put it at three months into the relationship. Maybe October or November of 2004.

I did it by the book and it was pretty good. It was also a lot of work, or so it seemed at the time to someone who didn't cook for other people very often. In hindsight, it probably could have been a dish that I practiced and could eventually wing, but I rarely did it again. 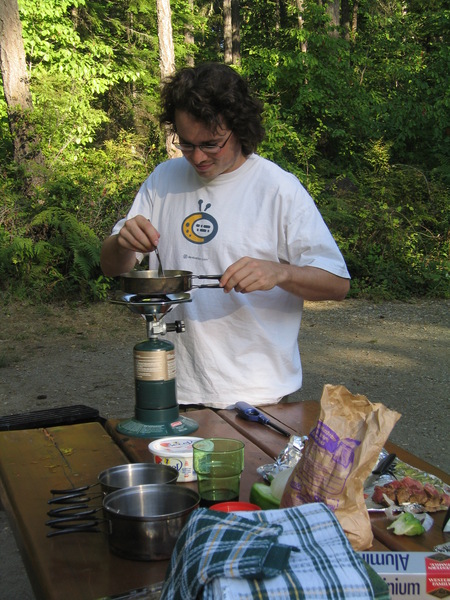 One of the only pictures of someone actively cooking that I have. For a task that we spent so much time on over the years, often together, that seems unfortunate. But with sticky hands, food everywhere, pulling the camera out probably didn't seem like a good idea.

At that point in time I don't think I really realized a person would get better at cooking just through practice and thinking about what you were doing. It seemed harder than that. There was possibly even some black magic involved. Regardless, I never got good at that dish and probably should have.

That said, there were always good take out places that had pad thai so there was never that much pressure. If we wanted it, we could get it easily.

The recipe called for a couple of sauces that I had to buy, oyster sauce and fish sauce. Hillary never threw out food if she could avoid it and those particular bottles made the move to Clearview. At least one of them Hillary would attempt to move to Beaverbrook.

I remember us packing up the kitchen stuff before moving out and going through the fridge near the end. She was putting the bottle into the box and I stopped her.

"We never use that. Throw it out."

"It's nearly full, it's a small bottle."

"We are not moving the same bottle of a condiment twice."

We didn't move it.

But I have both of those sauces in my fridge again. Both in small bottles, both likely used for a single dish once and then she kept them. I'm somewhat afraid of looking for dates on these.