Isaac was approaching one and a half years old. We had decided it was time to take him camping.

Since this was obviously our first time camping with a kid, we decided to go for a nearby provincial park. If everything went to hell, we could abort and get home in an hour or so.

Based on the timestamps of the pictures, it looks like I took that Friday off work. I believe Hillary was working compressed hours at that point, so it was probably her day off. 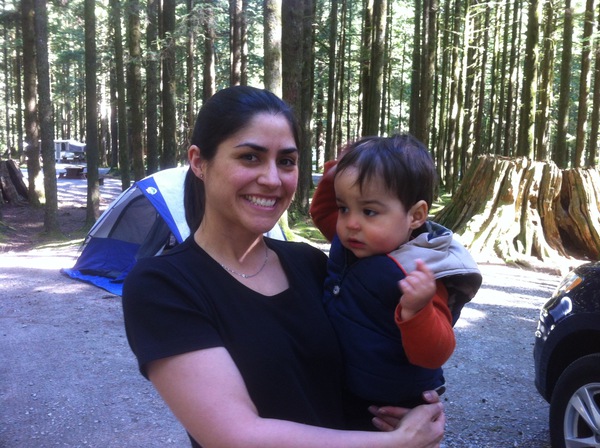 The site is setup and we're ready for adventure.

We went to Golden Ears and stayed at the Gold Creek Campground. We went on a short hike, Isaac threw rocks in the water, ate dinner, got tired and then spent the evening cuddled up with Hillary.

Also, he had a pretty bad cold. Poor little guy.

There wasn't much else to say. It was fairly uneventful other than him snoring a fair bit due to being stuffed up. He cuddled between us in the tent and woke both of us up a bunch of times. Isaac wiggled a lot while he was sleeping. 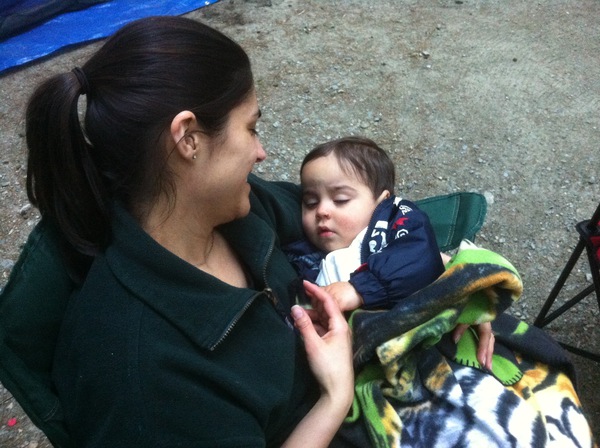 He wasn't really interested in the campfire. All mommy at this point. This would be in the last couple of weeks that he was still breastfeeding once per day. Hillary had a work trip at the end of May and he stopped at that point.

I would make a point of getting Isaac out camping every year after that. I only missed 2018 due to the last minute trip to Ontario. I had been planning on taking him the weekend we left.

Paige's first camping trip would be in September of 2015.

I think I generally got one or two camping trips solo with the kids each year after that.

Hillary would come if we were doing a multi day trip. She camped less after the kids were born. While she enjoyed it, it was a lot of work and there were aspects that she was definitely done with.

I suspect that had life not gone where it had, we might have picked up a small trailer at some point in the next few years. We talked about it a fair bit and I think that would have increased Hillary's comfort level substantially. Not to mention made a bunch of things far easier.

But who knows. It didn't happen and here we are.