In 2017 I had basically taken the summer off of work. Isaac was at home for a couple of months before he started kindergarten and Paige had just moved to a new daycare. I took the kids camping a few times for quick overnighters to a couple of different places.

We camped, as we always did in Whistler, at the Riverside Resort.

This had been a rough summer for Hillary. At this point, we didn't know it was cancer, but we knew something was pretty seriously wrong. Her energy levels were way down and there were other strange things going on. At this point, she'd already had the CT scan that would show the tumours that would lead to the speculative diagnosis of pancreatic cancer, but we hadn't been told yet.

We got there on August 25th and setup camp. It's a walk in place, so we ferried all of our stuff. The kids fought over pushing the wheelbarrow. We setup the ridiculously large tent while swearing and laughing. The kids rode their bikes around the campground and along a short stretch of the Valley Trail. 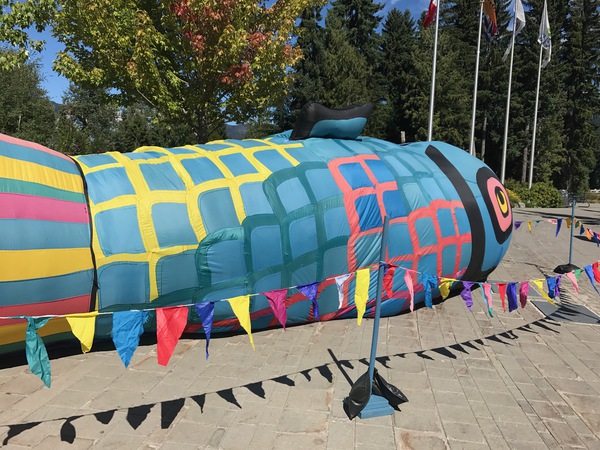 There was some sort of a fish festival going on in the village. The kids loved whatever this thing was. You can imagine how fresh the air was inside of it given it was baking in thirty plus degree weather for days.

The loose plan for day two was that I was going to go for a ride on the Lost Lake trails for an hour or so, then we'd all saddle up and ride over to Meadow Park. It was a couple of kilometres one way, but Paige had gotten to the point that she could do that on her run-bike.

The afternoon was open. It was going to be stinking hot, so I was partial to heading over to Lost Lake or something like that for a swim. Granted, it'd likely just be me and Isaac going in with Paige dipping her feet, but you know.

Hillary wasn't feeling great first thing on Saturday morning, so I deferred my ride. In hindsight, this made sense. At the time she'd just have random days and hours with little to no energy and we didn't know why. I was grumpy about this, but what could you do.

Regardless, after we cleaned up breakfast we set out on a family ride around Green Lake to the playground and waterpark at Meadow Park. It was already hot and sticky. The kids had fun. We enjoyed watching them. Obviously we didn't know it at the time, but this would be our last family bike ride with the four of us. 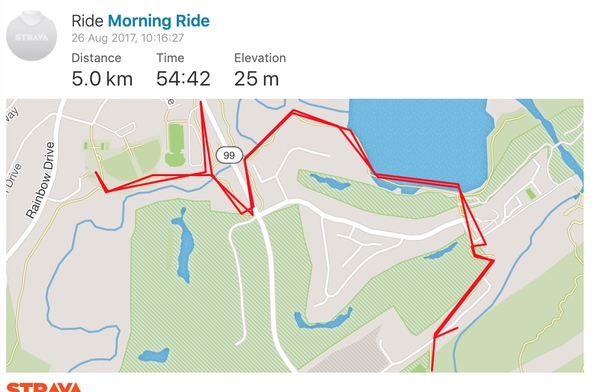 A blistering top speed on this ride. Paige only had one meltdown.

By the time we got back for lunch, Hillary was feeling pretty terrible. She was having trouble articulating what was going on other than just having no energy. Still, she sent me off on my bike and I did a quick loop and was back in about an hour.

It was stinking hot.

We made it out to Lost Lake for a swim with the kids. The 'swim' was what we had predicted, we mostly didn't go in, but splashed around a bit. Hillary and I discussed the exceptional scenery.

Day three I got out with each kid for a solo ride while Hillary spent time in the village with each kid. It was stinking hot. It seemed that it was a special day in Whistler for some reason. There was a storytime and parade going on with a giant salmon tent or something. I don't know. I just know that Hillary and Paige were super sweaty when Isaac and I got back. 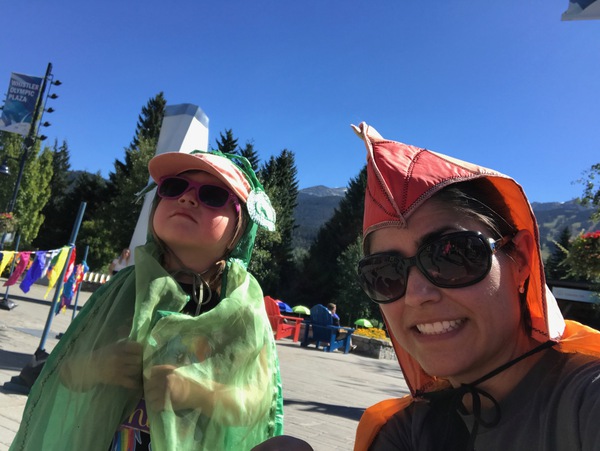 So much sweat. Of course you should put on another layer when it was 30C outside.

It was stinking hot.

Then we finished packing up, sweated our way back to the car and got ready to drive home.

Fortunately, there was another swimming lake available just off the highway on the way. We stopped for another swim. This lake was too cold even for Isaac. I swam a bit and encouraged him to jump in once or twice. He immediately got out again.

The kids passed out shortly after we started the drive home. Hillary and I talked and held hands as we usually did while I drove. 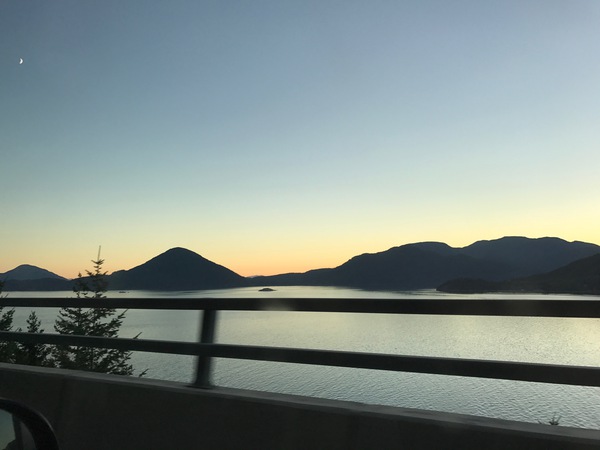 Obligatory picture taken by Hillary from the passenger seat. Timing of this one indicates to me that we actually left Whistler on our third day there somewhere around 6:30 PM. That would also be the latest we'd ever leave to come home. We got a full weekend in.

There were a bunch of lasts on that trip. It was the last camping trip. Our last bike ride with the whole family. It was the last time we went anywhere without the spectre of cancer hanging over us.

It wasn't the last lake swimming. Well, to be fair, the last time Hillary swam in a lake was years before. But she was there to watch the three of us in a lake a few more times.