One way of looking at the October 2004 trip was that it was a week long sales pitch organized by me about the west coast.

To that end, I tried hard to make sure we did a number of things that I felt really showed off the area to someone who hadn't been to the area. One park that I went to a number of times while growing up was Lighthouse Park. I have good memories of scrambling up and over rocks and looking over the ocean.

For some reason, I didn't take Hillary to Lighthouse Park and instead took her to Whytecliff Park.

The park is basically west coast rainforest on a rocky bluff overlooking the ocean. Little trails bring you close to rocks and you can ignore the signs and get to better viewpoints closer to the edges. 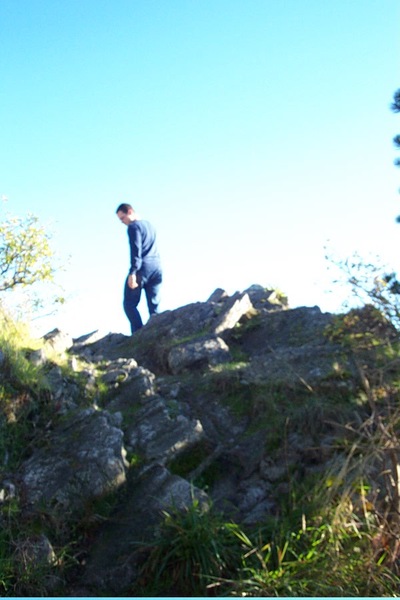 Wow, the camera we took on this was was *bad*. Me reaching the end of a trail on a bluff.

Hillary's balance wasn't great. There are reasons for that, none confirmed, but I have a pretty reasonable guess. Suffice it to say that she used a lot more visual stimulus for stabilization than most of us. As an aside, this is one of the reasons why her side of the bed was always so easy to figure out in any hotel. She had near perfect eyesight, but I had way better dark vision than her.

As has been established before, at the time of this trip we had not been together very long. I knew she had iffy balance, but hadn't had much experience yet with what her comfort levels were. I did know that going 'off trail' while something she was physically capable of, wasn't a normal part of her outdoor adventures to date.

So we got to a point where a little ridge of rock jutted out a bit over the ocean. Dropping five to seven metres down to the water. Hillary scrambled out onto it. I remember feeling very nervous. My girlfriend with questionable balance was on a narrow ridge of rock with a near sheer drop into the ocean.

It wasn't super dangerous if she slipped, Hillary could swim. It wasn't a potentially lethal drop, but it would have been messy. A broken ankle or leg were certainly possible.

Perhaps Hillary was comfortable and knew it was fine for her. Perhaps she was a bit nervous and was showing off. Perhaps she was enjoying everything and wasn't overly used to this kind of 'hiking' and thought nothing of it.

Most likely it was the first one, except for the fact that I learned later that she really didn't like heights. So I don't know.

I called out to her and suggested she come back from that particular scramble. Whatever I said, or whatever was in my voice amused her. She hadn't seen me worried about much of anything before.

She did turn around though and we clambered over other rocks and boulders for the rest of the outing.

Later, Hillary would insist that it felt like wide trail. I see no reason to doubt that. This is also exactly what I would expect her to say if she wanted to assuage my fears. It's also exactly what she would have said if she was feeling a bit guilty about making me feel worried.

Regardless, that's all speculation. All I know is it ended up fine and fourteen years on, I can still see her standing on that ridge with the drop down to the rocks and ocean below her.

It still makes me nervous. 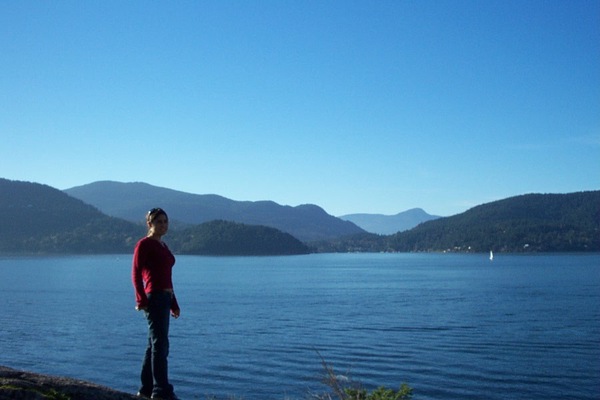 We got better at taking pictures. Really, if I could go back in time and tell myself one thing, with the caveat that what I told myself couldn't materially change my life, I would basically say, "Screw everything else, have the people you are with in every picture." I learned that in about 2010.
looking back
trips
october trip
Sekret: