We're coming up on something like three weeks of nearly daily queries from the kids. "How many days until Easter?"

Unfortunately, a response like, "Two weeks this Sunday," is not considered valid. The only acceptable answer is a number that they can verify. It's possible I should have gotten a calendar after all.

Anyway, here we are. The number is low enough now that the kids can remember day to day and they are super excited and terrified about the impending bunny visit. As with many things, this will be the first year that I have to hide the eggs myself. That also means it will be the first year where there aren't a few hidden in places the kids won't find. 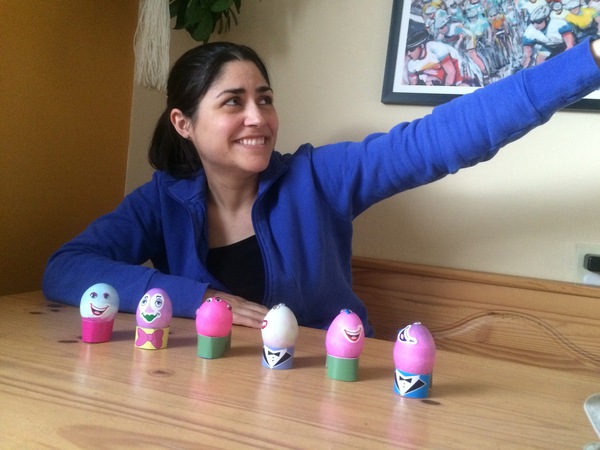 Easter 2015, Hillary and Isaac had decorated eggs. I don't have a picture of both of them with their creations. It was evidently warm and Isaac wasn't exactly wearing clothes. So I won't post him.

Hillary loved chocolate. Lots of people do, this isn't really news. We mostly didn't do anything interesting for Easter until one year we did.

I had picked up some eggs and was intending on hiding them around the house for Hillary. I snuck around the evening before and stashed away a dozen or so dark chocolate eggs. As I was hiding away the last one, I found another egg.

One that I hadn't hidden.

This brought me great amusement the next morning as Hillary came into the kitchen and relatively quickly found the first chocolate that was notably not one of the ones she had hidden. Those few seconds of dawning realization were great.

We found eggs. Towards the end of the hunt, Hillary, always the pragmatist, asked the question, "So how many did you hide?"

"Maybe? Do you remember where they all are?"

The last egg was found weeks later. One point Hillary.

In future years I wrote a cheat sheet or at least had a hard count of how many were in play.