While pregnant with Isaac, Hillary was intensely motivated to get the house totally setup just right for our changing family. It started in the living spaces but inevitably, we needed a room for this child.

I'm mostly going to use the royal 'we' here. These decisions ultimately were a we thing. That said, I think Hillary would have absolutely accepted the role as prime driver for a lot of this.

My suggestion was to hit Ikea and pickup a basic convertible crib. That plus somewhere to change the kid and we'd probably be good to go.

That was not going to cut it for Hillary's first baby. We ended up in a relatively upscale baby furniture store out in Richmond. I could probably dig out the name of it if I really needed to. It was a long drive. We went after work. I think it was chilly out, so definitely in the fall.

We looked and looked and looked. There were some very nice options for sleeping arrangements for children. Faced with a reasonably high price tag, I tried once more to suggest we at least look at what our Swedish friends had to offer. This was rebuffed.

So that's how we became the proud owners of a very nice heavy wood crib that could later be converted into a double bed and a matching change table/dresser.

I don't remember how we got it home. I think we ordered it that evening and then went back to the store when it was delivered a couple of weeks later.

I do remember working on the crib though. Hillary was elsewhere working on other things in the house. I had to attack it.

It came unassembled. I learned then just how spoiled I was with my previous Ikea experiences. Instructions are a very hard thing to get right and these ones were not. I believe my largest issue ultimately came down to a step about halfway through where the perspective used in the illustration was ultimately ambiguous as to which notch something should be attached to for 'infant mode'.

I had to pull it apart twice.

Isaac slept with us for the first several months of his life. Once he moved into that crib, he was there until he was almost three years old. Not terribly long after that, we learned that to convert the crib to a double bed required the purchase of more parts, which would cost as much as an entire Ikea crib itself. We also learned the head and footboard would be the railings of the crib that Isaac had gnawed on for the last couple of years. 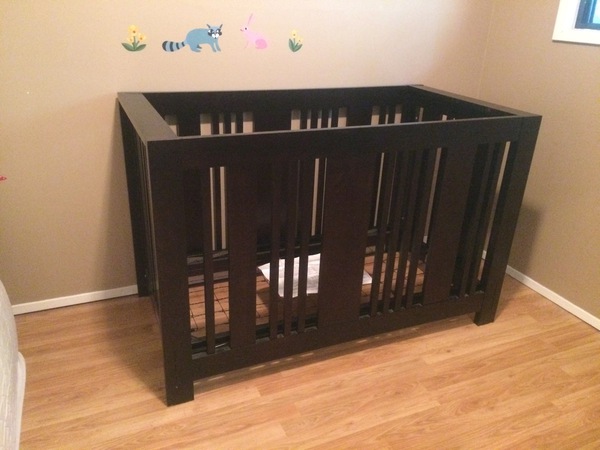 The crib in mid 2015 just before we sold it. Not terribly visible in this picture are the numerous teeth marks.

We finally released that crib back to the wild and sold it on craigslist in August of 2015. The kids' new bedroom had been refloored months earlier. The 'big' crib wouldn't fit in that room with the bunkbeds. I was working at home more and needed to move my office up from the basement. Natural light is nice.