I like video games. I'm not a huge gamer by any stretch of the imagination, but I've played a lot of them over the years. I think the best way to describe it is that I appreciate the medium.

I believe that there are games out there for everyone. Or at least there will be at some point in the not too distant future. The breadth of the medium is wide enough that there can be a game that tickles the brain of just about anyone.

Hillary was a tough nut to crack.

I remember her noting that she played a lot of tetris during various periods. This would not surprise me. She was past that game when I met her though. 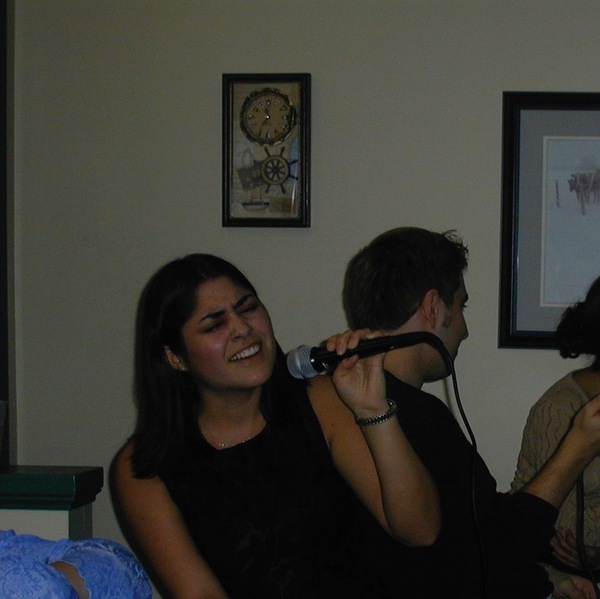 Karaoke is a video game. She would never accede this point. It should be no surprise that Singstar was one of her favourite games of all time. Not that the list was long.

She tolerated my hobby though and would often cuddle up on the couch with a book or, later, an iPad and Netflix if I was in the middle of some longer game that required use of the TV.

The first video game I remember playing with Hillary a fair bit was Dance Dance Revolution (DDR). It was active, competitive, and had good music. I think getting away from the traditional control schemes were a big drawing point for her. Perhaps.

Rock Band, Guitar Hero and Singstar were three other music based games that we played a fair amount of. Mostly these were played at our Beaverbrook Lane townhouse as we lived with Brett at the time. He had invested in some of the equipment heavy games. I did buy Singstar and even after moving to Vancouver we did break it out once or twice. I don't think we played it after the kids were born.

By the time we were married, I only really exposed Hillary to games that I felt had a pretty good chance of catching her interest. I looked for unique mechanics. Interesting stories.

She played Monument Valley all the way through. That is a pretty short game, but it was beautiful and really interesting to look at. The game was released when Isaac was about three. We'd occasionally fire it up on the iPad for him and Hillary would often sit with him and assist or just watch and listen to the music.

We played a bunch of Keep Talking and Nobody Explodes, a cooperative game where one person runs the computer. The other 2-4 players flip through a manual desperately trying to find appropriate instructions to disarm the bomb.

We got three chapters into Life is Strange. I really enjoyed this game and whenever we sat down to play for an hour or two, Hillary did as well. I'd control the game and we'd discuss what path to take and how to respond to things. We didn't finish it because, according to her, "I keep forgetting that we are working on it."

Perhaps I should have reminded her more.

A month or so after Hillary was diagnosed with cancer, I bought Overcooked. A cooperative cooking game. In addition to being a game you all play on the couch together, it absolutely requires coordination and acting as a team. We'd play a level, discuss what did and didn't work, then try it again.

After playing once or twice with Hillary, I bought two more controllers. The basic mechanics were simple enough that the kids would be able to play as well. So we would. Not often, but probably a dozen times, the four of us would sit on the couch. Hillary and I project managing and trying to organize getting through the level. Isaac mostly helping except when he got distracted and just watched the avatars of Hillary and I motor around. Paige would sometimes collect the 'pizzas' (dirty dishes) in the game and wash them. More often she'd make her character 'dance'.

Overcooked was the first 'hold a controller and press buttons' game that I saw Hillary get good at. She was, not surprisingly, pretty good at DDR and very good at the singing games, but those had some real world skill involved.

The cooperative aspect was definitely one Hillary appreciated. I did too. Despite our ongoing good natured competitions, video games was one area where we were happier to work together.

Being able to play together with the kids was also great. I had played other games with the kids, but this was the first one that Hillary got into and enjoyed. I remember Hillary laughing the first time she noticed Paige's avatar doing crazy circles and rotating in place instead of getting the pizzas.

"What are you doing Paige?"

"She is dancing!", Paige laughed hysterically at this as she moved her thumb in circles on the controller.

We played it more often in the spring and summer of 2018. The kids, especially Paige, having another several months of development made it easier to actually play. We could begin to see the shape of how the game would work with a four player team.

Hillary and I played together alone a handful of times in the late summer. For a rare period in our relationship, I'd just have to mention the name of the game and she'd get up and we'd slowly head downstairs. We were, as you'd expect, a good team. The fist bump after getting through a hard level was immensely satisfying.

The week before she went into the hospital for the last time she actually said to me, "Let's play some Overcooked."

That was the last time we played and the first time she'd ever suggested to me that we play a video game together.