As I understand it, Hillary did swim in the lake fairly often growing up. I admit I find this hard to believe. It's possible she talked this up somewhat. She loved sailing. We would canoe several times including a multi-day camping trip once.

Nonetheless, by the time I had met Hillary, swimming was something she'd do occasionally to either impress me, it was super hot out, or it needed to be done with the kids.

Ocean kayaking is to BC what portaging canoe trips are to Ontario. I tried (gently) for much of our relationship to talk Hillary into trying it out once. She never bit. She knew that kayaks would move around more than a canoe and this worried her. She had a pretty severe fear of the kayak flipping and her being trapped under it.

So it never happened. We'd rent canoes to take the kids out on the water on local lakes and streams here. We scouted Widgeon Falls as a possible first 'back country' camping trip. It was appealing as we'd just have to canoe in for an hour to the site.

Kayaking would come up about once per year, usually after some friend or relative mentioned in passing that they went and how much they had enjoyed it.

I don't really know what conversation happened, but when we were at the cottage last August, Hillary decided she wanted to try the kayak. Perhaps Amy made a really convincing argument. Perhaps Hillary had just watched and wanted to try something new as it looked peaceful and relaxing. Likely both.

Who knows. But, for what I believe was the first time, she went kayaking. She was sore later, she'd probably pushed herself a bit too hard trying to go fast. Her muscle loss was fairly pronounced by this point and while she'd been walking regularly, upper body workouts were a thing of the past.

She enjoyed it. She talked about it several times in the next couple of months before she died. At some point I made the comment along the lines of, "Too bad we didn't try it out a few years ago, eh?"

"I wasn't ready to try it then. That was the right time to start." 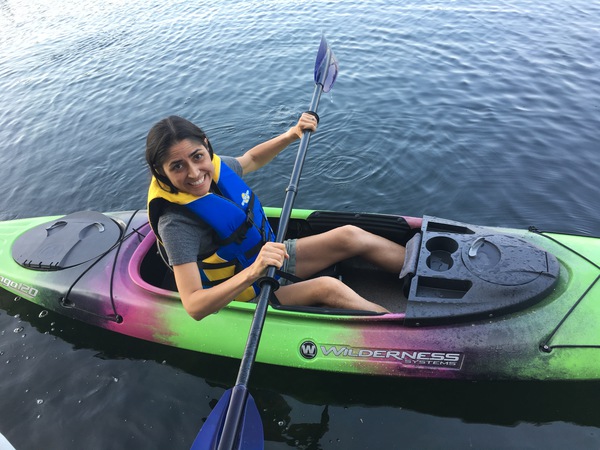 Some measure of success. That's the typical Hillary smile combined with a touch of stress, but measured with determination. You would be forgiven for mistaking it with a grimace.
looking back
boats
water
ontario 2018
Sekret: