The Grouse Grind is an iconic Vancouver hike. It's not terribly interesting. Nor is it long. But it is easy to get to, three kilometres long and gains 850m of elevation in that three kilometres. It's not scenic on the way up, but once you are there, the view is amazing. 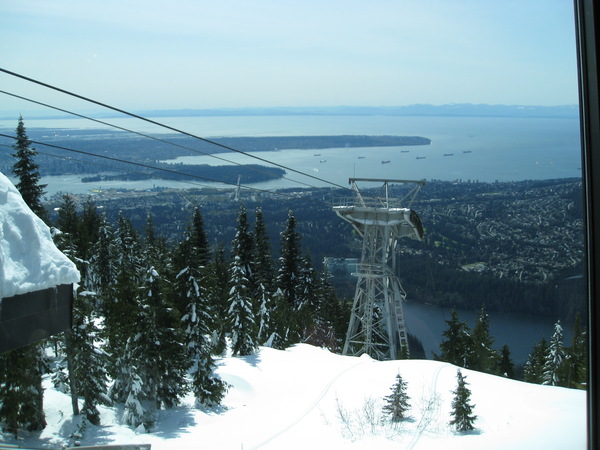 View from the coffee shop at the top of the grind. Because any civilized mountain hike should have a nice restaurant at the top.

This is the last of the major events of the October 2004 trip that I need to write about.

So we decided to do this hike. I never had. While it's an iconic hike, I grew up in White Rock. That puts it at a solid hour's drive from home and if you're driving that far for a hike? Well, there are nicer places to go.

I don't know who pitched it to whom. Likely I mentioned it. The challenge and how accessible it was appealed to Hillary. The fact there were coffee shops and the like at the top likely improved it's appeal.

So we headed out to do it.

The weather was decent when we got there. I think it was overcast.

We started out and I mostly let Hillary set the pace. She went hard. As we went up, groups of people more familiar with the hike and folks who clearly used it as a primary workout passed us. This caused Hillary to try to go faster.

At about the halfway point, to use the cycling terminology, she blew up. We slowed down dramatically as a group of probably ten year olds hiked up past us. Hillary, frustrated at what she saw was a failure, decided to give a particularly offensive rock a kick.

We finished the hike at a more reasonable pace.

Over the time we'd hiked, the clouds had moved in a bit more. The spectacular view of the Lower Mainland was, well, gone. 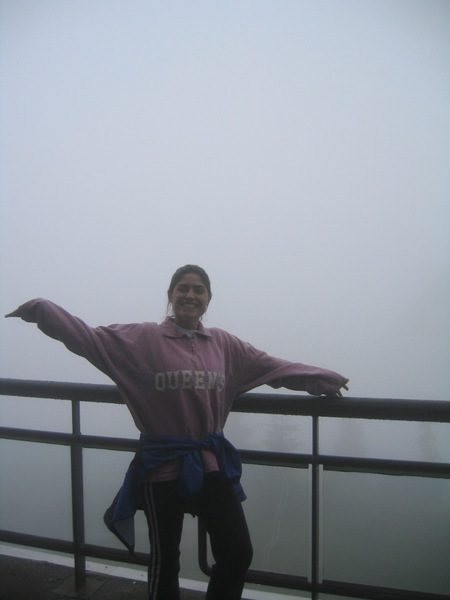 Effectively the same view as the picture above. This picture in particular would be a source of amusement for both of us for our entire relationship.

We joked about how this was a sign for something in our relationship. The future is foggy and who knows what might come up. Best laid plans being waylaid by random chance. Those kinds of things.

But we did what we did and laughed about it, had fun and made it through. The next mountain hike we'd do would be Fairview Mountain in 2006. The weather cooperated there.

Hillary and I never did the Grouse Grind again together. I think she did it one more time with someone who was in town, but I could be wrong on that. So I guess technically it was also the last time we did that hike. It's kind of nice that this last thing happened in the nascent stages of our relationship. Last things happen all the time.