During the 2005 trip we spent time on Vancouver Island. As we did on most of our early trips from Ottawa to the west coast, we brought camping gear.

I think we spent a total of either four or five nights on Vancouver Island on that trip. Two of those were at Goldstream Park just outside of Victoria.

Goldstream Park seemed closer to the city than most of the provincial parks we stayed at. It was also one of the more spectacular. I remember driving into the park, getting an assigned spot and parking.

Three things stood out from that particular park.

The site we were in backed onto a ravine. Well, more onto a ledge that then went down into the ravine. I remember a couple of massive trees there. Certainly larger than any we typically saw in our day to day lives. Obviously not to the level of Cathedral Grove, but these particular ones had been around a while. It was amazing. 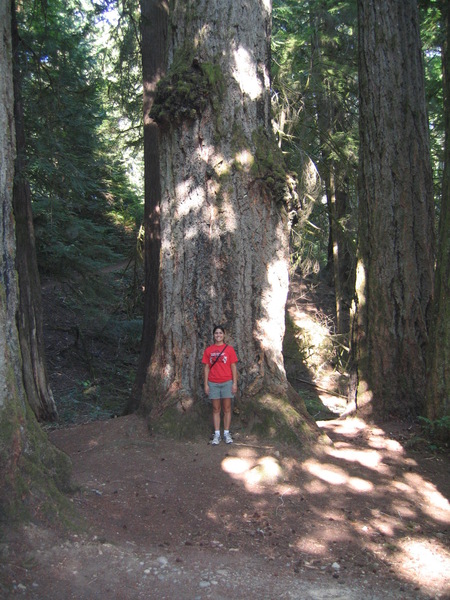 A tree behind our campsite. Picture taken after about five hours of hiking over pretty hilly terrain.

2. Pulling up to the park entrance

As we pulled up to the entrance, Hillary dug out her purse so we could pay. Only, the digging wasn't going overly well. There was no purse. This wasn't the first time this had happened.

We had stopped at a Tim Horton's maybe a half hour back up the road. Hillary's best guess was that the purse had come in and we had left it there after lunch. (Almost certainly chili. Chili and a bun there isn't what it used to be. But it used to be pretty good.)

So, before checking in, we turned around. We drove back. Hillary went in and found it still hanging on the back of the chair she had been sitting in. No contents were missing.

On our second day there, we went for a hike. I'm not entirely certain what our planned destination was, but where we ended up was far from it. We ended up finishing the hike along the highway as we figured that was going to be faster than retracing our steps. It was.

As we did this hike, I remember at least three distinct climate zones. Or at least different areas that had pretty wildly different vegetation.

The first was the (near) old growth forest where the campsite itself was located. The trees were huge and there was little to no underbrush.

Later, there was a valley that almost felt like a far more temperate rainforest. The underbrush was massively more dense than we had been seeing. The ground was muddier. Perhaps the best way to say it was it was almost like a hillside swamp.

Finally, we went through an area that was far more arid than the rest. The dense, lush underbrush gave way to stragglier things.

I suspect this had to do with where the rain shadows of the mountains near the park were. Still, it was amazing.

I don't remember how long this hike took us, other than it was long. The first picture we took on the hike was timestamped at about 2:30. The last was after 7pm.

Goldstream Park was another one of the places we talked about and looked forward to taking the kids one day. I may do it at some point. There are other places to explore and maybe some will just remain memories of her and I.