The SCD and lasagna

As I've mentioned before, Hillary had ulcerative colitis for much of her life.

For many years after her initial diagnosis, certain foods were cut out and Hillary largely was in remission for a number of years.

For the entire time I knew Hillary dairy, other than hard cheeses, was something she would avoid. This definitely made a difference. Beyond that, I knew that she went on and off of wheat and other grains. Those seemed to generally have less acute effects.

When we first started dating, her colitis had been flaring up somewhat and Hillary was ready to try to attempt other controlled diets to see it would work for her. The one that seemed to have promise was the specific carbohydrate diet (SCD).

I might write more about the SCD at some point. We definitely started it in the Parkdale apartment. It definitely ended in the Clearview apartment at some point. It never really helped Hillary, so we slowly phased it out over time. It was a challenge.

Very loosely, this cuts sugar, grains, starches, and dairy out. Well, not all dairy, the lactose free hard cheeses were still fine here.

Being new in the relationship and gung ho to try things, I elected to also attempt to live on that diet with her. Since we were spending so much time together by that point, though not living together yet, it seemed simpler anyway. 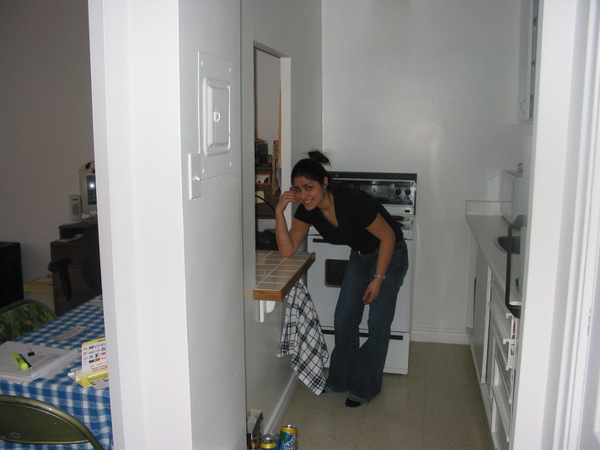 The kitchen where we committed the crime. Also the first place I ever made pad thai.

Hillary loved a good lasagna. All carbohydrates, really, but pastas were always pretty high on her list of delicious easy to make dinners. Losing the lasagna option, even though it was rarely constructed, was a mental hurdle.

So at some point, we elected to try to make the SCD approved lasagna. It used tons of zucchini and I think eggplant for the 'noodles'. All in all, it seemed reasonable so we bought the ingredients and got to it.

Lasagna is a fairly labour intensive dish to make. The nice part is you often end up with lots of food, so that balances somewhat. The SCD did not make this any easier. Instead of boiling noodles, you had to thinly slice the zucchini and soften it in the oven. Then you could construct it as normal.

I think it's safe to say that including the shopping trip, we spent over 3 hours on this meal and likely it took the entire afternoon.

I remember us both being very underwhelmed with the final product. It was edible, but it was definitely the first thing we had constructed that was on the 'never make this again' list.

Probably all of those reasons to varying levels.