Tomorrow a large ride departs from Ottawa. Somewhere between 1500 and 2000 riders (based on previous years) will ride from Ottawa to Kingston. On Sunday, they will ride back to Ottawa.

This is the Rideau Lakes Cycle Tour put on by the Ottawa Bicycle Club for the last fifty years or so. There are a number of different routes, but the classic route is 171km each way for a total of 342km over the weekend.

Those were the two longest rides we ever did together. To date, those two days are still the longest two rides by distance that I've ever done. The Ride for Water and one day on the Cross Canada ride are the only two other rides I've done in the past thirteen years that were close in terms of total time on the bike.

We knew by this point that we were going to do the Cross Canada ride in 2007. We'd been riding a fair bit on the trainers over the winter and were regularly going 1-3 hour rides together. The most common ones being a loop or two of Gatineau Park or the out and back to the weekly OBC time trial.

Hillary had some friends at the Patent Office that had pitched doing the Rideau Lakes tour as a group. All but one ended up backing out. I had a co-worker at my company who also did it every year, so we knew about it and figured it was worth an attempt.

I remember nothing of the lead up.

I remember starting at Carleton University by the gym. Dropping our overnight bags, loitering around the start point and then finally rolling out with a large group. After an hour or so we ended up in a group of maybe 20 or 30 riders who were rolling a comfortable double paceline until about Perth. Things broke up there with various folks taking different amounts of time refuelling and topping up bottles.

I don't think we had any mechanicals.

I remember the descent into Westport and us talking about not looking forward to riding up that climb the next day.

I remember Hillary in her road shoes and walking daintily everywhere trying not to fall. Slowly plodding through gravel parking lots where the aid stations were setup. My clipless setup was SPDs at that time, so while the shoes were stiff, I had plenty of grip. It wasn't until many years later that we discovered Look cleats that had rubber grips on the bottom. By then though, Hillary wasn't riding the Trek anymore and was sticking to her trusty commuting steed.

I remember us both feeling fairly good as we finally rolled into Queens University, checked in and got our room. We showered, cleaned up and I think we had a nap.

The memory gets fuzzy here. Hillary always remembered and asserted that we slept through the dinner that evening and ended up eating elsewhere. I definitely remember breakfast in the big common room in the morning and I'm pretty sure I remember dinner. Who knows though. We could have probably hashed that all out at some point, but I hadn't really thought of this ride in a couple of years so the chance to discuss and set the record straight is lost now.

The next morning we woke up, had breakfast and, sore, started riding again.

The route back is the same as the way down, but while I don't recall a gravel road stretch on day one, I definitely remember it on day two. Hillary was nervous about taking her road bike with the skinny tires onto gravel and we picked our way through it.

The last third of day two was pretty rough. A gentle, but steady headwind slowed us down. Both of us bonked that day, Hillary much harder than me. It's possible that I remember the gravel on day two more as it would have come right around the time Hillary was at her lowest.

Then, with I think about 30km to go, the sag wagon pulled up beside us.

"We're the sweep vehicle. If you want a ride, now's your chance. There won't be support behind us."

We looked at each other. Hillary responded, "No, we're good."

I remember pulling into the Carleton parking lot and seeing only a few bags left. We weren't the last ones in, but we weren't far from it.

My memory is that it was twilight or at least the sun was low in the sky, but that doesn't really make much sense given that sunset in early June is somewhere after 8pm. It's entirely possible that clouds were just rolling in and it was getting a bit darker.

I guess we got home. We almost certainly didn't cook dinner that night. My best guesses are that we would have ordered pizza or picked up Vietnamese at the great place off Holland Avenue that would have been loosely on the drive home.

We continued our rides in Gatineau Park and to the time trials.

And about eleven months after the Rideau Lakes Cycle Tour of 2006, we set off on our big adventure. 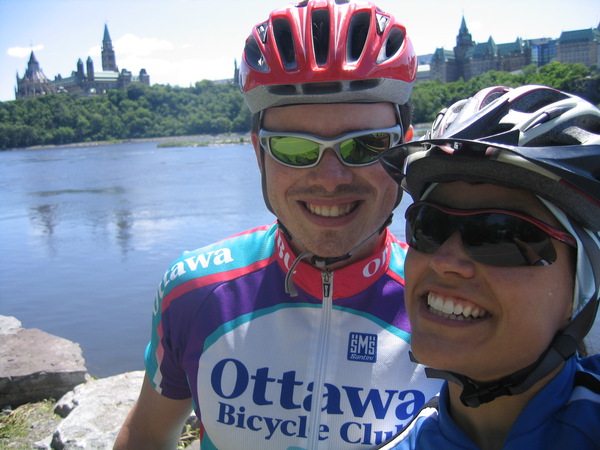 A few kilometres into a ride, one of the few selfies we took back then. This was a year after the ride I talked about here.
looking back
bikes
riding
Sekret: